Monday forecast: Cloudy with a high of 75 degrees

Showers are possible on Tuesday into Wednesday.

MINNEAPOLIS (FOX 9) - Expect more of the same when it comes to weather for the Twin Cities for the start of the work week – temperatures will be in the low to mid-70s with some clouds.

This weather pattern continues as we remain stuck between two weather systems – last week's high-pressure system and a very slow area of low pressure that's meandering toward Minnesota. So expect pleasantly warm weather on Monday and Tuesday, with a high of 75 degrees and some clouds – the highs are about 10-15 degrees above average for this time of year.

As the low-pressure system gets closer, there is a greater possibility for some scattered showers. However, it's still far enough away, and the area is still dry enough that rain sprinkles aren't expected until late Tuesday into Wednesday.

The low-pressure system that's moving in, likely by Wednesday, will bring chances for scattered showers and send temperatures more towards what's normal for this time of year. Thursday's high is 52 degrees, while Friday will be chillier with a high of 49 degrees.

But temperatures will start to rebound, with highs in the 60s likely this coming weekend. The average high this time of year is 65 degrees. 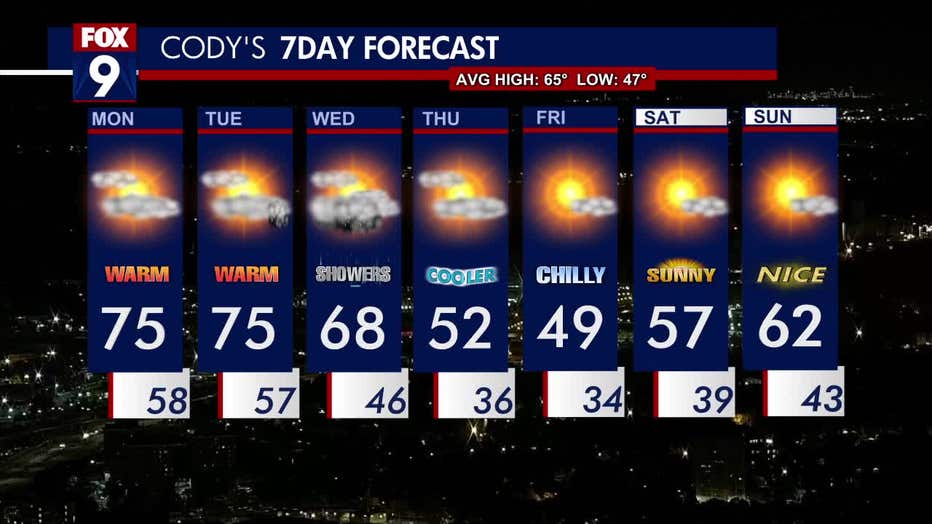