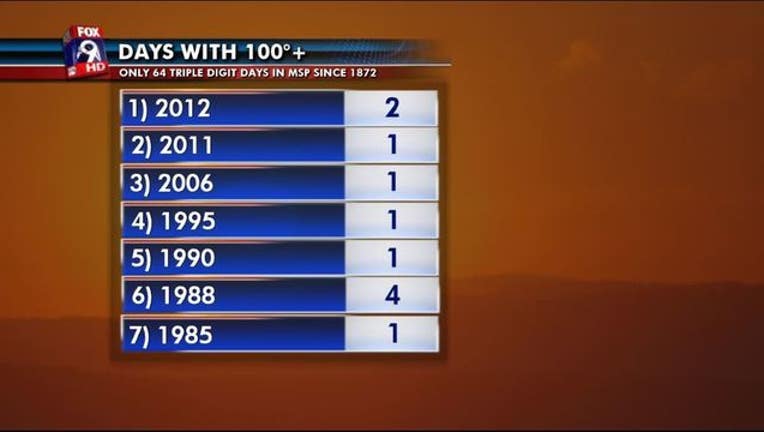 MINNEAPOLIS (KMSP) - For this being one of the coldest spots in the U.S. we sure do seem to talk a lot about triple digit heat in the summer.  While we can reach the milestone every so often, it may be far more uncommon than you might think.

So, for example, if the thermometer reads 95, but the dewpoint is in the tropical range of the mid 70s, then the heat index will likely be around 110.  So, it may FEEL like 110, but the thermometer doesn’t actually reach that number… and that’s where a lot of us may get confused.

Since 1872, the Twin Cities has recorded 64 separate days with a triple digit temperature, the highest of which came during the Dust Bowl era of 1936, when the thermometer hit 108.  But in our recent history, the century mark has been far more elusive.

Hitting the century mark on Saturday is a pretty big long shot for the metro, however we will likely be really close with good chances for the mercury to climb into the upper 90s.