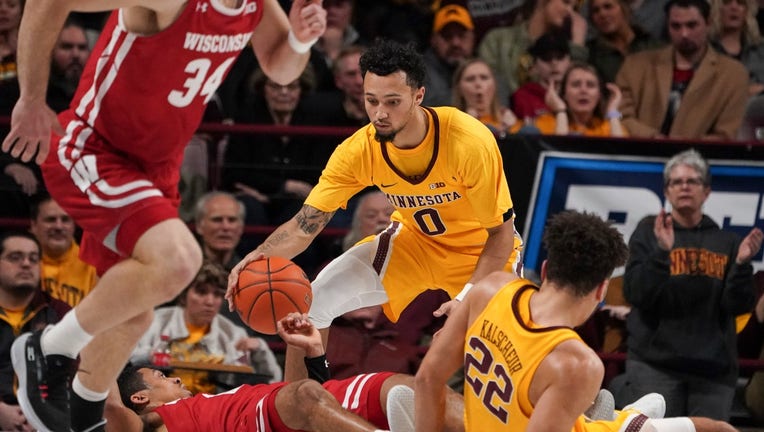 MINNEAPOLIS - The University of Minnesota men’s basketball team trimmed a 19-point second half deficit to three Saturday, but couldn’t get any closer in an 83-77 loss at Penn State.

The Gophers couldn’t fully recover from shooting 9-of-30 (30 percent), including 0-of-7 from the perimeter, in the first half. They came up short in another opportunity for a quality road win.

So what does it mean moving forward? The Gophers have seven regular season games left, and they still have chances to add to their body of work to lock up an at-large bid to the NCAA Tournament. That, and they can still make a run at the Big Ten Tournament. Gophers fans hope it doesn’t come down to needing a make a run there to avoid a sweat on Selection Sunday.

Magic Number appears to be 17

After Saturday’s loss in front of a sellout crowd at Penn State, the Gophers are 12-11 on the season and 6-7 in the Big Ten. Richard Pitino wouldn’t speculate earlier this season and how many wins it would take to feel safe on Selection Sunday, but that number appears to be 17. That would mean going no worse than 5-2 over their final seven games, and finishing no worse than 11-9 in the Big 10.

That’s doable, with four home games left and plenty of opportunities for quality wins. Finish an even 10-10, and Minnesota likely needs to win at least one game, if not more, at the Big Ten Tournament to feel comfortable about its NCAA Tournament chances.

Gophers are 1-8 in true road games

A rough first half offensively cost the Gophers a chance at would would’ve been a quality win on the road in the Big Ten at Penn State. It also dropped Minnesota to just 1-8 in true road games this season. The Gophers’ lone victory away from Williams Arena in a true road environment was at Ohio State, where Marcus Carr hit a long 3-pointer to secure a 62-59 win over the Buckeyes. Minnesota has three road tests left in its final seven-game stretch, at Northwestern, at Wisconsin and at Indiana. The Wildcats have just one Big Ten win this season, so the Gophers have to find a way to get a win at Evanston. Split between Wisconsin and Indiana, and they should be feeling good about their NCAA chances.

If you haven’t gotten to Williams Arena to watch Daniel Oturu play, you have four chances left this season. That might be it, because Oturu is playing at a level that should have him First Team All-Big Ten, and possibly leaving school after this season to declare for the NBA Draft. Oturu finished with 32 points on 12-of-23 shooting, and 16 rebounds at Penn State.

His 20.1 points per game leads Minnesota and is in the top five in the Big Ten. His 11.5 rebounds per game leads the Gophers and the Big Ten. Draft projections are all over the board, but some are consistently coming together to have him a top-10 pick after this season. There’s a very real chance he’ll be pursuing a pro career after just two seasons in Minnesota.

The Gophers are 10-2 at Williams Arena this season, with only one home Big Ten loss to Michigan State. They have home games left against Iowa Sunday, Indiana, a top-10 team in Maryland and the regular season finale against Nebraska. Simply put, Minnesota must defend its home court to be taken seriously in consideration for the NCAA Tournament.

It won’t be easy and there’s plenty of work to be done against quality Big Ten teams, but the Gophers have to defend their home court if they want to avoid the NIT conversation. If they can solidify an NCAA Tournament spot, it would be three in the last four years for Pitino and the program.

Can a consistent third scorer emerge?

The Gophers know what they’re getting from Daniel Oturu and Marcus Carr, who combine to average 35 of Minnesota’s 70.4 points per game. What they need is a consistent third scorer to come out of the fold. The hope coming into the season was that it would be a combination of Gabe Kalscheur, Payton Willis and Alihan Demir. Willis scored 21 points and hit five 3-pointers in Minnesota’s win over Wisconsin, but made just one shot from the field and finished with three points in a loss at Penn State. Kalscheur has had shooting streaks and is getting closer. After five straight games under double figures in scoring, Kalscheur has at least 11 points in four of Minnesota’s last five games. They’ve gone 2-3 in that stretch. Minnesota needs a consistent third scorer to take the load off Oturu and Carr, especially if one or both get hurt or in foul trouble.

The bottom line is the record may not look great at 12-11, but with seven games to go, the Gophers largely control their own destiny for Selection Sunday and the NCAA Tournament. Win your four home games and get one or two on the road, and you’re dancing in March.