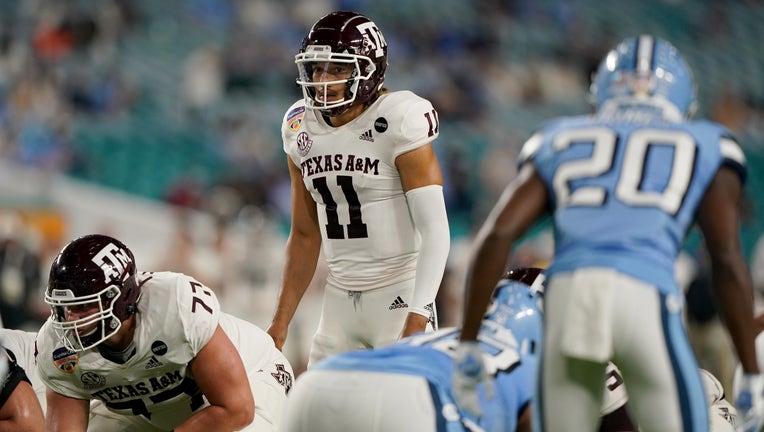 Kellen Mond #11 of the Texas A&M Aggies under center against the North Carolina Tar Heels during the first half of the Capital One Orange Bowl at Hard Rock Stadium on January 02, 2021 in Miami Gardens, Florida. (Mark Brown / Getty Images)

(FOX 9) - The Vikings took what could be their quarterback of the future on Friday night, taking Kellen Mond from Texas A&M with their first 3rd round selection.

The 6'3'' former Aggie went off the board to Minnesota with the second pick of the third round, which the Vikings got from the New York Jets during the first round of the draft.

Despite the pandemic, Mond put together an accurate final season with A&M, throwing 19 touchdowns with just 3 interceptions on a 63 percent completion percentage over 10 games.

The dual-threat quarterback, who reportedly ran a 4.56 40-yard-dash at his Pro Day, also can make plays on his feet, scoring 22 rushing touchdowns over his four years in college.

The Vikings followed up Mond's selection by taking a former quarterback turned linebacker with North Carolina's Chazz Surratt at pick 78. The Vikings have two more picks in the third round.