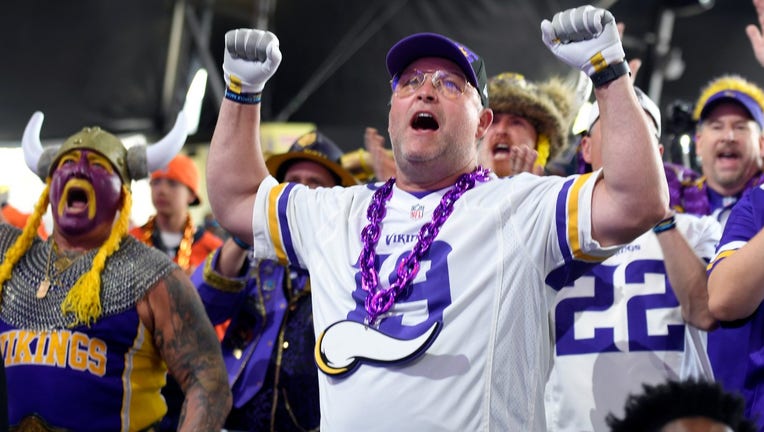 Minnesota Vikings fans celebrate during round four of the 2022 NFL Draft on April 30, 2022 in Las Vegas, Nevada.  ((Photo by David Becker/Getty Images))

The Minnesota Vikings will head east to face the Philadelphia Eagles in Week 2, with a kickoff set for 7:30 p.m. that will be nationally-televised on ABC. It’s part of a staggered start for the NFL on Monday Night Football, with the Tennessee Titans facing the Buffalo Bills starting at 6:15 p.m. on ESPN.

The Minnesota Vikings have announced a game in London against the New Orleans Saints as part of its 2022 schedule.

The Vikings last played the Eagles in Week 6 of the 2019 season, a 38-20 win for Minnesota at U.S. Bank Stadium. The Vikings also got a 23-21 win over the Eagles at Lincoln Financial Field in Week 5 of the 2018 season. In 2017, the Vikings lost the NFC title game at the Eagles 38-7 after beating the New Orleans Saints with the "Minneapolis Miracle’ the week before.

The Week 2 match-up will mark the third time the Vikings will face the Eagles on a Monday. It’ll be the Vikings’ first appearance on Monday Night Football in September since beating the Saints 29-19 to open the 2017 season.

This year’s Monday night game is two weeks before the Vikings head to London, where they’ll face the Saints on Oct. 2 in Tottenham Hotspur in Week 4.