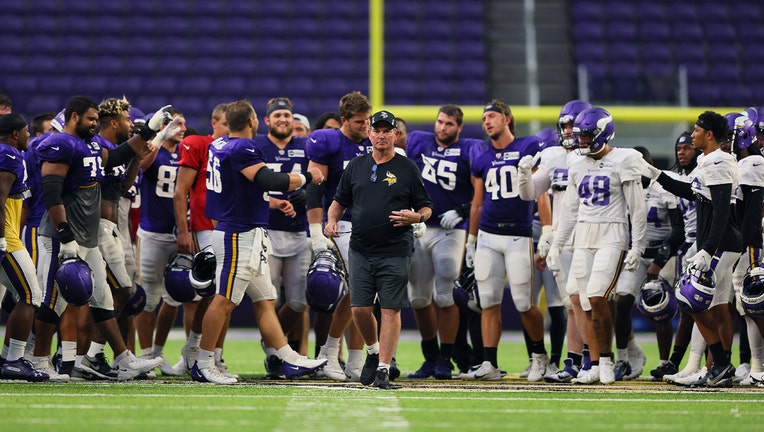 MINNEAPOLIS - A season with high hopes and even higher expectations kicks off Sunday afternoon for the Minnesota Vikings at the Cincinnati Bengals.

There were no real surprises when the Vikings released their inactives list 90 minutes before kickoff. The team announced Friday linebacker Anthony Barr is out. Barr has not fully practiced since Aug. 5 at training camp, and has been dealing with a knee issue, according to the team’s injury report.

Barr was a limited participant at Wednesday’s practice, then was held out of workouts Thursday and Friday. Barr missed most of the 2020 season after suffering a torn pectoral muscle during a Week 2 loss at Indianapolis. Nick Vigil will get the start in Barr’s place.

Also not playing Sunday is rookie offensive lineman Christian Darrisaw. The first round pick out of Virginia Tech has been limited in practice most of the offseason, and has had a pair of procedures on a groin/core issue. He returned to practice this week, but isn’t ready for game action yet. Rashod Hill will get the start at left tackle, and Oli Udoh will make his starting debut at right guard.

Sunday marks the first time all the Vikings’ offensive weapons will be on the field all at the same time. Dalvin Cook and Justin Jefferson did not play in the preseason, and Adam Thielen played one series. Tyler Conklin will get the start at tight end, with Irv Smith Jr. out for the season. Sean Mannion is the back-up quarterback to Kirk Cousins, and running back/return specialist Ameer Abdullah was activated from the practice squad on Saturday.

The Vikings did not score an offensive touchdown in three preseason games.

Sunday will also mark the first game for a revamped Vikings defense that struggled in 2020 between injuries and inexperience. There will be as many as eight new players on the field against the Bengals. Danielle Hunter is back healthy, and Michael Pierce will play after opting out of the 2020 season. The Vikings have also added Dalvin Tomlinson, Sheldon Richardson and Everson Griffen inside. D.J. Wonnum won the starting defensive end job opposite Hunter in camp.

Perhaps the biggest changes came in the secondary. The Vikings signed Patrick Peterson, Bashaud Breeland, Xavier Woods and Mackensie Alexander, adding talent to help out Harrison Smith. Mike Hughes was traded, and Jeff Gladney was released in the offseason. The biggest surprise of Sunday's inactives is Dantzler, who is a healthy scratch and is buried on the depth chart behind Kris Boyd and Harrison Hand.

The Vikings and Bengals kick off at noon, and you can watch the game on Fox 9.