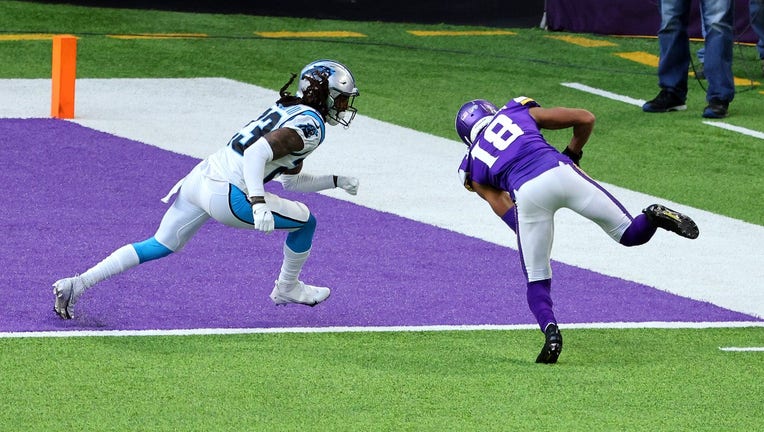 Justin Jefferson #18 of the Minnesota Vikings scores a touchdown during the fourth quarter as Stantley Thomas-Oliver III #23 of the Carolina Panthers is unable to make the tackle at U.S. Bank Stadium on November 29, 2020 in Minneapolis, Minnesota. ((Photo by Adam Bettcher/Getty Images))

MINNEAPOLIS - Neither selection was a surprise, but the Minnesota Vikings had two players chosen to the 2021 Pro Bowl Monday night.

This year will be much different. Due to COVID-19, there won’t actually be a Pro Bowl game played. Instead, the players selected will face off in a game of Madden 2021. Regardless, the players like getting the recognition.

"It felt great. You work hard and put so much into this game that we play, be away from families so much and just the sacrifice, some rewards don’t come with championships. You embrace them, but you still go back to work and get better," Cook said Tuesday.

With two regular season games remaining, Cook leads the NFL with 1,884 total yards. He’s second in the NFL behind Derrick Henry with 1,484 rushing yards, and tied for the league lead with 15 rushing touchdowns. He has eight 100-yard games on the season, and was the NFC Offensive Player of the Month in October.

It’s Jefferson’s first Pro Bowl, in his rookie season. He’s the first Viking receiver to do it as a rookie since Randy Moss. He found out after phone calls from team staff and his agent.

"It’s definitely a big honor. I’m so happy that I made it, I’m honored to be on that list with the top guys in the NFL," Jefferson said.

Jefferson leads all rookie receivers with 1,182 yards, which ranks eighth in the NFL. He’s also sixth among qualified receivers, averaging 16.2 yards per catch. He’s got 21 catches of at least 20 yards, which is tied for most in the NFL. Not bad for the No. 22 overall pick.

"Everything about that kid is special. He’s got special written all over him," Cook said. Carries himself like a five-year vet. I think he’s just scratching the surface."

Jefferson has seven touchdowns on the season, and six 100-yard receiving games.

"Just proud of him, happy for him. What a great accomplishment as a rookie to make the Pro Bowl," quarterback Kirk Cousins said.

After trading Stefon Diggs to Buffalo, the Vikings used one of the picks in that trade to take Jefferson in the NFL Draft. Minnesota now has its star receiver to pair with Adam Thielen, making life difficult on defenses. Thielen said he sent Jefferson a congratulatory text Monday night.

"Couldn’t be more proud. His ability to make big plays game after game after game, that’s something that’s stuck out to me the most. He’s been so consistent at making big plays in big moments of pretty much every game throughout the season," Thielen said.

Jefferson’s Pro Bowl pick is likely the first of many.