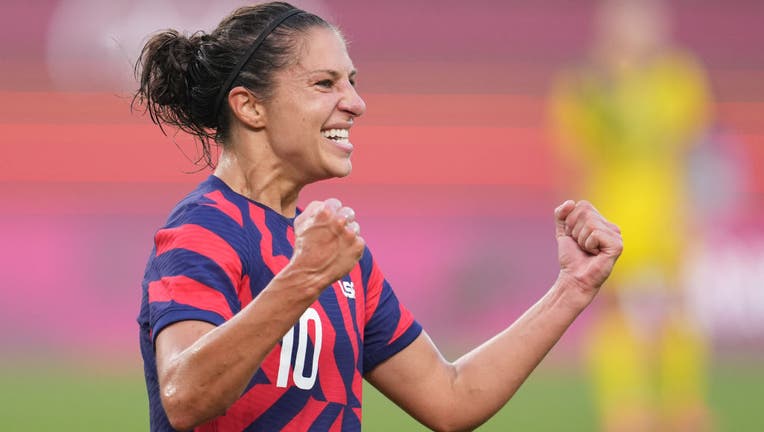 FILE - Carli Lloyd #10 of the United States celebrates scoring during a game between Australia and USWNT at Kashima Soccer Stadium on Aug. 5, 2021, in Kashima, Japan. (Photo by Brad Smith/ISI Photos/Getty Images)

MINNEAPOLIS - One of the most decorated players in the history of women’s soccer in the United States will play her final game as a professional Tuesday night, and it’ll be a packed housed at Allianz Field in St. Paul for Carli Lloyd.

The U.S. Women’s National Team is hosting South Korea in a friendly. Just last week, the two teams played to a 0-0 draw in Kansas City. Lloyd is the second-most capped player in soccer history, with 315 games played for Team USA. She’ll put on the cleats for the final time at the home of Minnesota United, and she plans to soak in every second.

Lloyd said Monday she'll have around 28 family and friends in attendance. She plans to address fans after the game.

"Emotions are going to flow, obviously. I don’t think any athlete ever thinks of the retirement word until it’s actually here. I’m going to savor every moment and I think it’s going to be truly special for one last time to give it everything I have for this team, for the crest, for the country, for the fans. I’m going to soak it all in and enjoy it," Lloyd said.

Lloyd couldn’t come to the Twin Cities without some entertainment away from the pitch. Lloyd, Alex Morgan and Megan Rapinoe were among a contingent that went to the Rolling Stones concert Sunday night at U.S. Bank Stadium, and got to meet the legendary Mick Jagger.

Lloyd, 39, has played soccer since she was 5 years old. She’s spent the last 17 years representing Team USA at the highest level. Lloyd has played in four World Cups, is a four-time Olympian and two-time Olympic Gold medalist.

Lloyd scored the game-winning goals in the finals of both the 2008 and 2012 Olympics. She also helped lead the U.S. women to FIFA titles in 2015 and 2019. She became the first player ever to record a hat trick in a FIFA World Cup final, scoring three goals against China in 2015.

She’s third in Team USA history with 134 goals in international play, including 98 after turning 30.

"Her career is remarkable. I don’t know that it will ever be matched. She showed aged is just a number. She’s earned every bit of her success with hard work, determination and commitment," Team USA coach Vlatko Andonovski said. "She’s a soccer icon anywhere in the world. If she was a male soccer player in Europe, you would have statues of Carli Lloyd all over. Streets would be named after her, that’s how big she is."

Tuesday will be a bittersweet night for Lloyd, who is stepping away from the playing side of soccer after more than three decades. She wants to start a family with her husband, and start whatever the next adventure is. She said she’s not done with soccer, she’s just finished playing.

"I can’t leave the game altogether. This is a goodbye on the field, but this is not a goodbye for me in the soccer world," Lloyd said.