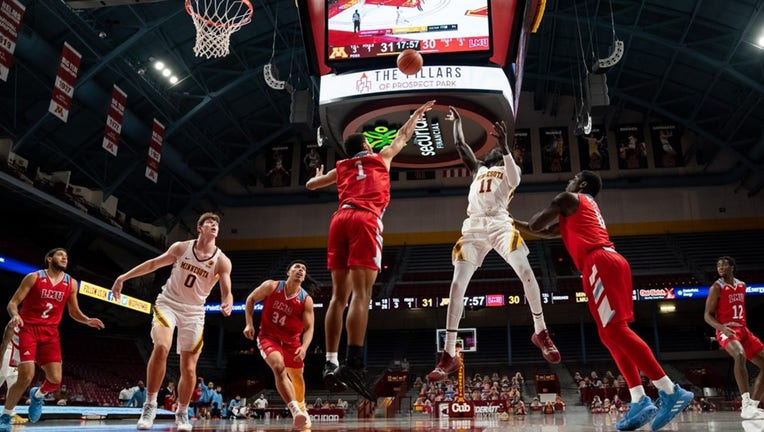 Both Gach scores for the Gophers during their 67-64 win over Loyola-Marymount Monday night at Williams Arena. ((credit: University of Minnesota Athletics))

MINNEAPOLIS - University of Minnesota men’s basketball coach Richard Pitino considers every game played this season a blessing, forging ahead amid the COVID-19 pandemic.

The Gophers are 6-0, and have been battle tested in two of their last three games. They needed a late 3-pointer from Marcus Carr to beat Loyola-Marymount 67-64. Then in the ACC/Big Ten Challenge, they came back from down 15 in the second half to Boston College, forced overtime and beat the Eagles 85-80.

They get an entirely different test on Tuesday. They hit the road to open the Big Ten slate at No. 13-ranked Illinois. It’s the start of a brutal four-game stretch to open the Big Ten against Iowa, Michigan State and Wisconsin, teams projected to finish in the top half of the league. It’s an opportunity for the Gophers to make a statement.

“I would hope that everybody feels it’s a challenge to play us, that’s the way I look at it. I don’t ever remember a Big Ten game being easy, I just don’t,” said Pitino, who is 48-82 in seven Big Ten seasons.

It’s an entire different year in the Big Ten, due to the COVID-19 pandemic. Players go through daily testing, and it’s the team’s first road trip under new guidelines.

They can’t eat together, but they’ll have a morning shoot-around at Illinois and then it’s a game without fans against the Illini, which is coming off a loss at Missouri.

“There’s so many things that are totally different than what you normally would go through. I haven’t been on a plane in nine months, it’s crazy. It’s just a different experience, not even close to normal,” Pitino said. “We’re trying to pull off sports in a pandemic. As much as we want it to be competitively equitable, safety is the No. 1 most important thing.”

Pitino knows that better than anybody. The Gophers had to pause for two weeks before the season after multiple COVID-19 cases within the program.

He takes a team with six new players into its first Big Ten game Tuesday night, against an Illinois team loaded with talent and experience. One of the Gophers’ biggest bright spots early on? Both Gach.

The Austin native and Utah transfer has been one of Minnesota’s most consistent players through six games. He’s averaging 15.3 points per game, shooting 40 percent from the perimeter and averaging 6.2 rebounds per game. Playing in the Big Ten was one of the reasons Gach decided to come back to Minnesota.

We don’t know yet if forward Brandon Johnson will play Tuesday night. He suffered a left ankle injury against Boston College, had to be helped off the floor and the team did its postgame talk in the trainer’s room so Johnson wouldn’t miss it. Pitino said he’s day to day, and the hope was to get him back at practice Monday.

Pitino said Tre Williams was back at practice Sunday after hurting his quad/hip against UM-Kansas City and is feeling better.

One thing the Gophers are hoping for as Big Ten play starts? Better shooting from Gabe Kalscheur. The junior is off to a slow start, shooting just 4-of-25 from the perimeter through six games, and he’s made just two of his last 20. He’s getting good looks, they’re just not falling.

Kalscheur has impacted games in other ways, with quality defense and making crucial free throws. He said his confidence has not wavered despite a slow start.

The Gophers can make a statement with a win at Illinois Tuesday, assuming the game happens. There are no certainties in the COVID-19 era.

“It’s not going to be normal, the biggest thing is that we do it safely. It’s just about the safety more than anything. We’re trying to pull off sports in a pandemic. As much as we want it to be competitively equitable, safety is the No. 1 most important thing,” Pitino said.