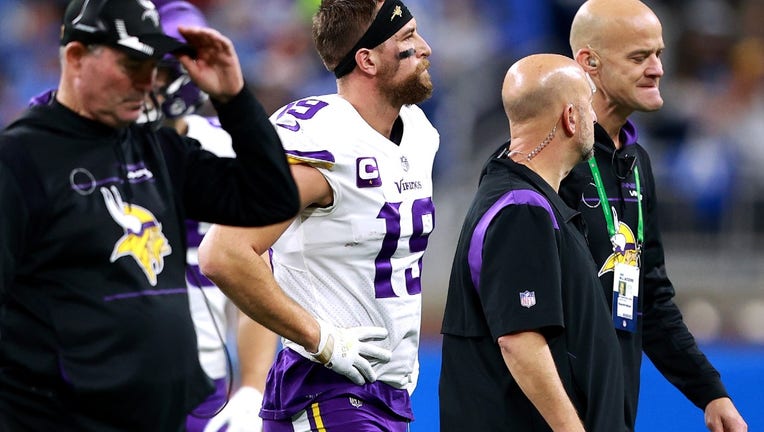 Adam Thielen #19 of the Minnesota Vikings talks off the field after an injury during the first half against the Detroit Lions at Ford Field on December 05, 2021 in Detroit, Michigan.  ((Photo by Rey Del Rio/Getty Images))

MINNEAPOLIS - The Minnesota Vikings have to have a short memory this week, hosting the Pittsburgh Steelers Thursday night after Sunday’s 29-27 loss to the Detroit Lions at Ford Field.

The Vikings will likely be without at least two of their top offensive weapons against the Steelers. Wide receiver Adam Thielen left Sunday’s loss with an ankle injury during the first quarter after his first catch, which went for no yards. He went down in obvious pain before gingerly going to the sideline.

Thielen went to the injury tent and tried running the sidelines to loosen up the ankle, but spent the rest of the first half on the sidelines in pads without a helmet. Thielen was ruled out for the game at halftime. Without Thielen and Dalvin Cook, who missed Sunday’s game due to a shoulder injury, Justin Jefferson had 11 catches for 183 yards and the go-ahead touchdown with 1:50 to play. Then, the Vikings’ defense allowed the game-winning touchdown as time expired.

According to ESPN’s Adam Schefter, Thielen suffered a high ankle sprain. He’ll have an MRI on Monday to determine the extent of the damage. That means Thielen and Cook are likely both unable to play Thursday against the Steelers, and Thielen would likely be out multiple weeks.

Thielen is second on the Vikings in receiving, behind Jefferson, with 64 catches for 686 yards. He leads the Vikings with 10 touchdowns, and is a primary red zone target for Kirk Cousins. Without Thielen Sunday, Cousins hit Tyler Conklin, KJ Osborn and Alexander Mattison a combined 14 times for 137 yards, and a touchdown to Osborn.

The Vikings are 5-7, and are on the outside of the NFC Playoff picture looking in with five games to play. There’s no more margin for error. They still have two games against the Bears, host the L.A. Rams and have to play the Green Bay Packers at Lambeau Field.

If the Vikings don’t make the playoffs, there could be several changes in the offseason. Lose Thursday night, and those changes might come sooner.