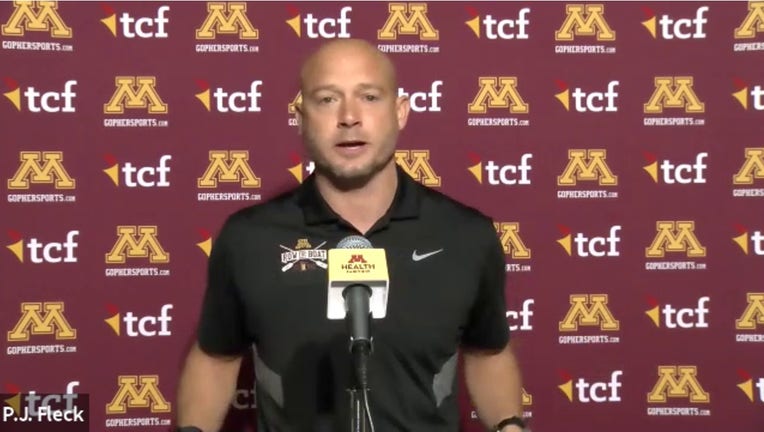 P.J. Fleck talked Monday about the death of Sid Hartman and preparing the Gophers to face Michigan on Saturday at TCF Bank Stadium.

MINNEAPOLIS - It wasn’t that long ago that a college football season didn’t seem possible in the Big Ten, but it’s game week for the University of Minnesota.

P.J. Fleck enters his fourth season with the Gophers, and has Minnesota coming off its best season since 1904. Fleck addressed reporters on Monday ahead of facing the Wolverines. Here’s a few takeaways.

The Minnesota sports world was in a state of shock on Sunday after the news became public that legendary reporter and columnist Sid Hartman died at the age of 100. Fleck was introduced as the Gopher football coach in January of 2017. One of the first people he met after coming to Minnesota? Sid Hartman. Fleck recalled Monday he would sit in his office after speaking weekly with reporters during the season. Hartman would ask him football questions, and they would have private talks that had nothing to do with football. Hartman was one of Fleck’s biggest fans.

“To know Sid was to love Sid. Sid is what Minnesota is all about. You’re talking about someone who lived to 100 years old, worked his entire life, never looked at work as work. Never looked at a job as a job, he literally did what he loved to do all the way through his passing. We talked to our team last night about that, about finding something that you love to do that you never have to stop doing. That’s what Sid is about. I’m really going to miss him. He will never, ever be forgotten inside our program,” Fleck said.

Fleck said plans are in the works to honor Sid throughout the 2020 Gopher football season and beyond.

Preparing for the unknown with COVID-19

College football coaches have the ultimate challenge this year. Prepare to play an opponent, not knowing in a given week who you’ll have healthy, and who you’ll be facing on the other side. Fleck said it’s like preparing for ghosts. Right now, Minnesota’s only known opt-out due to the COVID-19 pandemic is Demetius Douglas. We most likely won’t know who is and isn’t available for the Gophers until they take the field for warm-ups Saturday night. What we do know is everybody has to be ready to play, whether they’re on the first team or the scout team.

“We’re going to need the entire football team. It doesn’t matter who you are or where you are on the depth chart, doesn’t matter if you’re on scout team. You could be the starter tomorrow, and that’s been our message from Day 1,” Fleck said. “There’s a reason why the year is free, we’re going to have to have all hands on deck.”

What does College GameDay mean for the Gophers?

For the second straight game at TCF Bank Stadium, ESPN’s College GameDay will be in town. It’ll mark the fifth time that’s happened in the history of the most popular show in college football, and it’s typically saved for programs like Alabama and LSU. The Gophers and Michigan will battle for the Little Brown Jug. Fleck continues to bring a national brand to the Minnesota program, and with that comes more attention and exposure. The show will look a lot different with no live audience due to COVID-19, but the message remains the same: Put Minnesota on the college football map.

“It’s a big part of what college football is in 2020, when you host College GameDay. It’s an event, it’s a spectacle, it’s a chance for us to be able to put our program, our university, our state on display in front of the whole country,” Fleck said. “We want to get back to those days of being a blueblood, and events like this back up what’s going on and continue to bring proof to what you’re building inside your walls.”

What’s the next step for Tanner Morgan?

Tanner Morgan had one of the best single seasons for a quarterback in Gophers’ history in 2019. He was a Second Team All-Big Ten pick and set school records in passing yards (3,253), touchdowns (30), completion percentage (66 percent) and passing yards per game (250.2). So where does he go from here? The next step is to lead the Gophers to a Big Ten West title, which could put him in the Heisman Trophy conversation. He’ll have Rashod Bateman and Christ-Autman Bell back, but he’ll also have to involve tight ends more, and there’s freshman talent in Daniel Jackson and Douglas Emilien. His greatest challenge will be knowing who he has as targets every week amid the COVID-19 pandemic.

“You have to be willing to adapt your play to the people around you, and I think that’s where Tanner has got to evolve the most. He’s just got to continue to evolve, and most of that is making every single person around him better by elevating his play,” Fleck said. “How Tanner plays based on who’s on that field at that particular time, I think that’s what’s going to elevate his game.”

Jumping into Big Ten play and the Little Brown Jug

The Gophers previously had Florida Atlantic, Tennessee Tech and BYU on the schedule to get ready for Big Ten play. They no longer have the luxury of non-conference play to get ready for a conference grind. They host a blueblood rival Saturday night without the luxury of snaps against an opponent. All they have to go on are practices and scrimmages. It’s also a trophy game that can set the tone for the season, one way or the other. Fleck will talk to his team about the Little Brown Jug on Tuesday. He’s faced the Wolverines once, a 33-10 loss in Ann Arbor in his first season. The bottom line is they have to be ready.

“That’s why you come to Minnesota. Those are the expectations and pressure that we’re going to be able to put on ourselves and be able to perform at a high level,” Fleck said. “Everything matters, every game matters, every week of preparation matters. That’s the mentality our players have. It doesn’t matter who we play, it doesn’t matter when we play, we have to be prepared to be at our best.”

Ready or not, college football is back in the Big Ten.