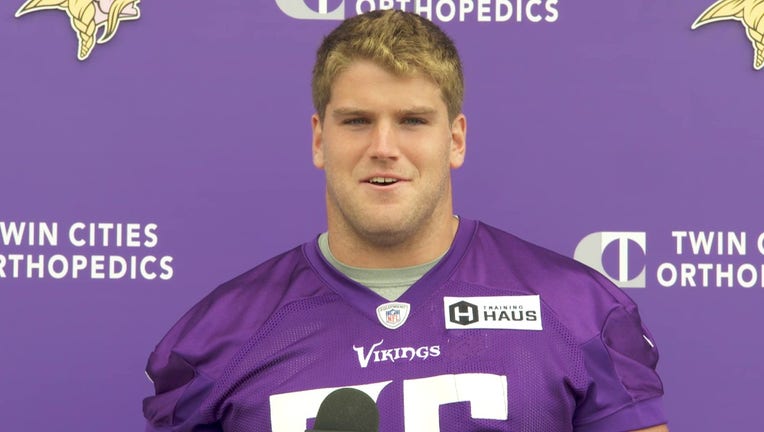 Brian O'Neill talked Wednesday after signing a 5-year contract extension worth more than $90 million to stay with the Minnesota Vikings.

MINNEAPOLIS - The Minnesota Vikings have made a habit of getting key veterans in contract years to sign extensions just before the start of the regular season.

Last week, it was safety Harrison Smith. On Wednesday, the team announced it has signed offensive lineman Brian O’Neill to a contract extension. O’Neill said the extension is for five years, and according to ESPN’s Adam Schefter, the new deal is worth more than $92 million. That makes O’Neill the second-highest paid right tackle in the NFL.

Vikings practice ahead of 2021 season opener versus Bengals

The Vikings hit the practice field on Wednesday as they get ready for the start of the 2021 regular season this weekend versus the Bengals.

"I’m just happy to be here and be a part of this. I just love being here and being in the locker room with these guys, coming out to practice every day and just being a part of the organization. Getting to play for this team is a privilege, I’m just happy to keep doing it," O’Neill told reporters before Wednesday’s practice at TCO Performance Center.

O’Neill thanked several people with news of his big pay day becoming official. He started with Vikings’ ownership and the front office, thanked his family and then went to his coaches, Rick Dennison and now Phil Rauscher.

The Vikings drafted O’Neill with a second round pick in 2018, and he’s been one of the team’s most consistent players since. He’s played in 46 career games, 42 career starts. He made 11 starts as a rookie, started 15 in 2019 and all 16 last season.

So when did he know a new deal would happen? In his own words, it was months ago.

"The certain point was earlier this offseason when I said I wanted to be here no matter what. I’ve known that for a long time, just the people we have in this building and everybody around here. I just want to be a part of it. This is where I want to be. I want to be a Viking for my whole career," O’Neill said.

On Sunday, he’ll line up at right tackle alongside a group that includes Rashod Hill, Ezra Cleveland, Garrett Bradbury and Oli Udoh, who won a starting job in training camp with Christian Darrisaw battling injuries.

O’Neill said it’s the most excited he’s been about an offensive line heading into a season.

"I think we’re in a really good place. Hopefully we’ll be able to see the results, but we’ve got to go out and prove it and we’ve got to prepare today to have success on Sunday," O’Neill said.

When asked what players have contributed to make him the player he is today, O’Neill rattled off a list like it was in his personal rolodex. The first was defensive end Danielle Hunter, who returns this weekend after missing the 2020 season after neck surgery. Having to keep one of the top defensive ends in the NFL off your quarterback in practice will do a lot for your development.

"He just pushes me every day to get a lot better. The intensity he brings and the energy he brings to practice is contagious. It makes me a lot better being able to go against him every day," O’Neill said.

O’Neill just wants to focus on football. He gets that chance in practice, and on Sunday as the Vikings embark on the 2021 season in Cincinnati.