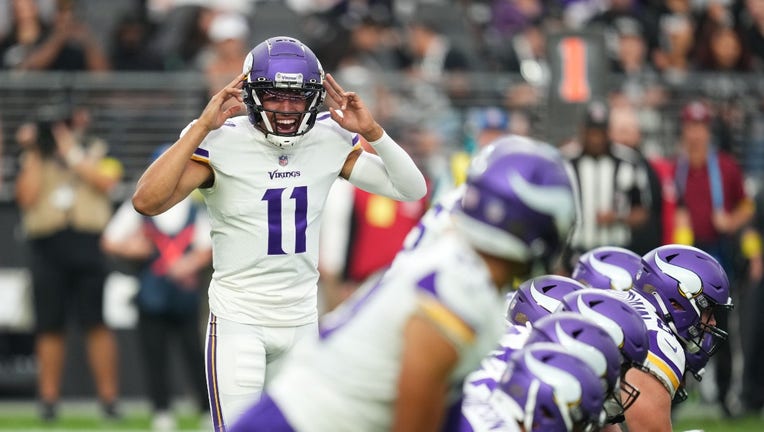 Quarterback Kellen Mond #11 of the Minnesota Vikings signals at the line of scrimmage during the first half of a preseason game against the Las Vegas Raiders at Allegiant Stadium on August 14, 2022 in Las Vegas, Nevada.  ((Photo by Chris Unger/Getty Images))

MINNEAPOLIS - The Minnesota Vikings lost their preseason opener and the unofficial debut of Kevin O’Connell, 26-20 at the Las Vegas Raiders on Sunday, but there were plenty of positives coming out of the game.

Kellen Mond appears to have the lead for the No. 2 quarterback job behind Kirk Cousins. Mond, after a slow start, finished 9-of-14 for 119 yards and two touchdowns, both to Albert Wilson. The first came on slant route from the 2-yard line in the third quarter. The second was on a 20-yard pass to the corner of the end zone in the fourth quarter, after Wilson had beaten his defender in coverage.

O’Connell said after the game Mond’s confidence grew after missing a few throws early, sparked by hitting Dan Chisena for 22 yards on a 4th-and-5 play in the third quarter. That drive ended with Mond’s first touchdown to Wilson.

"I think Kellen coming in, really, that fourth down play got him going. That’s what we want to see him do," O’Connell said. "The one thing I told him was really after what you saw on that fourth down conversion to Dan, that was the decisiveness. His first progression was taken away, quiet in the pocket, just progressing rhythm and threw an absolutely beautiful ball to Dan for a huge conversion. Then you saw him getting to his third and fourth progressions. When you see him getting back to that, that’s growth."

With a new coach, a stud young receiver and a reshaped offense, Vikings fans are hoping for a hot start to the year as the team plays in its first preseason game.

Sean Mannion started the game and went 8-of-12 for 79 yards, leading one scoring drive that ended with a Greg Joseph field goal. That came after Mannion overshot an open Ihmir Smith-Marsette in the end zone.

Mannion played the first quarter and half of the second before Mond entered. Mond played the entire third quarter, and the two each got a series in the fourth quarter.

The Vikings also got promising games from back-up running backs Kene Nwangwu and Ty Chandler. Nwangwu had seven carries for 41 yards, and Chandler had five carries for 50 yards, and added a 56-yard kick return.

The defensive highlights Sunday included four sacks. Harrison Phillips and Armon Watts each had one, and T.Y. McGill had two.

"We wanted to get those groups, especially the interior of the defensive line and that offensive line, get them some snaps together," O’Connell said. "Getting off the ball, communication up front. It was a really good chance to get those guys some snaps, but still being smart."

The defense had some penalties to clean up, getting eight flags for 71 yards. Rookie Andrew Booth Jr. had a pass interference and 15-yard facemask on the same play.

As for O’Connell, it was his first time taking the field as a head coach and when it was done, he got a chance to catch up with friend and mentor Josh McDaniels.

"It was exciting for me. Obviously we would’ve loved to win the game and give him a loss, but as far as this opportunity and the many others that will come this year, I never take for granted getting to talk to these guys before we go out, getting to talk to them at halftime about what we’re going to try to do to go win a game," O’Connell said. "These are opportunities that I’ll improve every single time and ultimately when it’s all said and done, I don’t take it for granted that I get to lead this operation. It takes away some of the nerves going into it because you know you’ve got great people and great players around you."

The Vikings host the San Francisco 49ers Wednesday and Thursday for joint practices at TCO Performance Center before they play a preseason game next Saturday night at U.S. Bank Stadium.