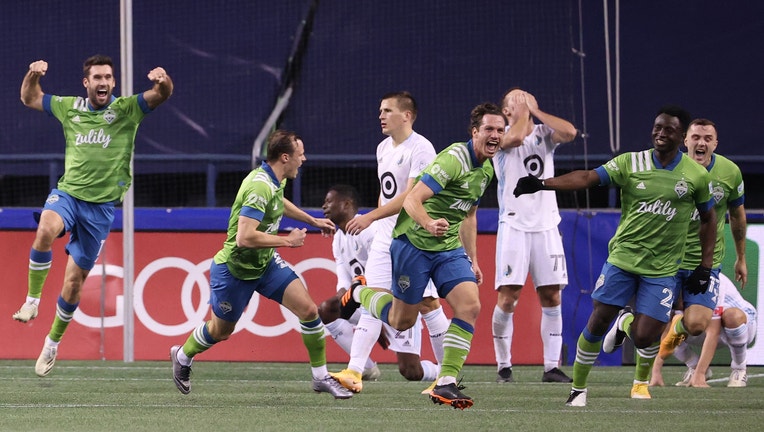 Gustav Svensson #4 of Seattle Sounders celebrates his goal in the 93rd minute against Minnesota United during their Western Conference Finals game at Lumen Field on December 07, 2020 in Seattle, Washington. The Sounders took a 3-2 lead on the play. ((Photo by Abbie Parr/Getty Images))

The Loons’ season is over, while Seattle will play Columbus Crew SC on Saturday for the MLS Cup title.

Minnesota United found itself fatigued and on its heels in the final 18 minutes with a 2-0 lead, and paid the price with Seattle in full attack mode. Four minutes after tying the game, Gustav Svensson scored the game-winner with a header off a corner kick in the final minute of stoppage time. Seattle celebrated, and the Loons were stunned.

"It’s a cruel game when you’re on the receiving end of it. I was a bit concerned about the lack of rest that we’ve had. I thought that was pretty apparent this evening. I can’t fault the guys for their effort, what they’ve done this year has been remarkable," Loons' coach Adrian Heath said after the loss. "Futbol is a cruel game, we’ve all been on the receiving end of that at some stage and we’ve been on the side where it’s you who gets the goals. Hats off to them, they always somehow seem to find a way. It’s in their DNA here."

The Loons now join other Minnesota sports teams in heartbreaking playoff losses when the game appears won. Minnesota was 18 minutes away from its first MLS Playoff Cup final, only to have it taken away by Seattle.

"It’s hard. This will be the last time this group of guys are together. For it to end the way that it did tonight, in that fashion after 75 really good minutes, I’m just sick to my stomach, everyone in that locker room is sick to their stomach," midfielder Ethan Finlay said. "It was a great year, but absolutely disappointing tonight."

Minnesota United scored first on a goal from Emanuel Reynoso in the 29th minute. Ethan Finlay was taken down, drawing a Seattle yellow card. On a free kick, Reynoso got a shot over a wall and curled it inside the post.

The Loons made it 2-0 in the 66th minute on a goal from Bakaye Dibassy. Reynoso got a free kick, and Dibassy perfectly angled the header into the corner of the net. The goal came a minute after Jordan Morris sent a rocket off the post for Seattle that would’ve tied the game. Seattle also had an earlier goal taken away by video review. Dibassy's goal looked like it might be an early back-breaker, with the Sounders getting chances but not converting.

Then everything changed in the final 18 minutes.

Seattle started its comeback in the 75th minute, with Will Bruin beating Dayne St. Clair after a blocked shot. About 14 minutes later, Raul Ruidiaz tied it 2-2, scoring after collecting a loose ball off a corner kick.

Seattle stayed on the attack, and the Loons couldn't stop it. Svensson scored on a header off a corner kick, sending Seattle to a dramatic come-from-behind victory, and ending Minnesota’s season with a gut-wrenching loss. Seattle is one of the best teams in MLS on set pieces, and got their last two goals four minutes apart on corner kicks.

"Two set piece goals is not acceptable. That’s something we’ve been so good on and two give up two in quick succession like we did tonight was just, it’s not us. It’s not our brand," Finlay said.

The Loons were clearly fatigued in the final 20 minutes with Seattle on the attack. Heath made it clear he's not happy with MLS, scheduling the West title game four days after they beat Sporting KC. Seattle possessed the ball for 63 percent of the game and had another gear at the end that the Loons didn't.

"I know it’s been a strange year, but I don’t think it’s particularly fair when we’ve had to travel in the week, get back early Friday morning and we’re traveling Sunday against team like this who has had a couple of extra days to prepare," Heath said. "It would’ve been nice to have had the same amount of rest as Seattle."

Seattle has now won 15 straight playoff games since 2014, and is 6-0-1 against Minnesota since the Loons started playing in MLS in 2017. The Loons had a 10-game unbeaten streak snapped, and had not allowed a goal in 255 straight minutes in the MLS Cup Playoffs before Seattle rallied.

Minnesota United battled through a four-month layoff due to the COVID-19 pandemic and finished one game short of the MLS is Back Tournament final. They had games postponed due to positive COVID tests, and were one of four teams left in the MLS Cup Playoffs. They just didn't have enough to finish off Seattle.

"We’ve gotten to the point in this organization where there’s expectations, and that’s a good thing. It’s a good thing that our fans are going to be disappointed and not just happy to be here. That’s the mentality of this group. We will be back," Finlay said.