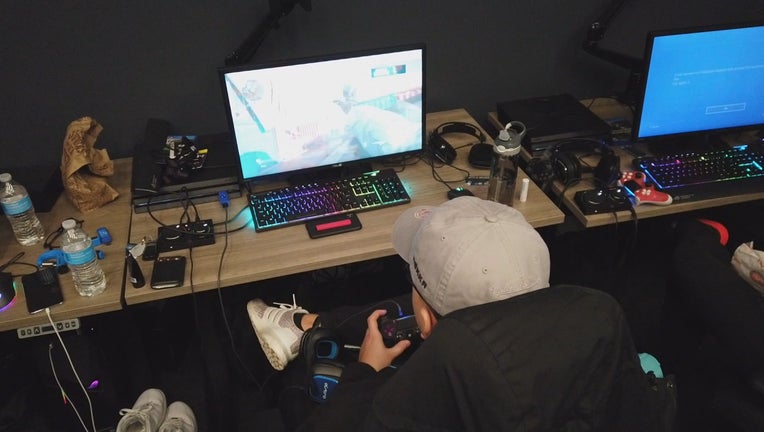 The Minnesota Rokkr will be making it's professional e-sports debut this weekend. (FOX 9)

EAGAN, Minn. (FOX 9) - Minnesota is now part of the rapidly growing esports community and this weekend at the Armory, the Minnesota Røkkr will make its debut in front of the hometown fans.

The new professional esports team, Minnesota Rokkr, will make its competitive debut and host the first-ever Call of Duty League tournament at the Armory in Minneapolis this weekend.

Minnesota Røkkr headquarters is officially up and running just in time for this weekend's Call of Duty league launch weekend, which kicks off Friday.

"You're going to see a lot of excitement from the crowd, there's a ton of good matches tomorrow," said Fargo-Palmer.

The state-of-the-art practice facility comes equipped with everything a pro gamer needs: practice stations, film review rooms and even a bed to recharge the mental batteries when needed.

"Their overall routine is not all that dissimilar from what the Vikings are doing across the street," said Brett Diamond, Wise Ventures Esports COO.

The players may get funny looks from people when they say they play video games for a living, but to the players, part of the fun is proving that their ability and their business are the real deal.

"It's awesome kind of proving all the old people wrong, ‘Like you can't do this, can't do it for a living, you know? Should be in school,'’" said Fargo-Palmer. "And this really panned out for a lot of kids my age and it's really showing everybody what we're all about."

This weekend's event is a big opportunity to showcase what the Røkkr is all about and no matter how they finish, the Røkkr are out to put Minnesota gaming on the esports map.

"Having a Minnesota-based team, that's really important to us," said Ashley "Midnite" Glassel, Minnesota Røkkr director of content. "As someone who's lived here my whole life, I feel like in esports and esports events, we were always kind of overlooked. Maybe events would go elsewhere, they're always in like Los Angeles and stuff like that, so to have one here in the home where I grew up, that's amazing."