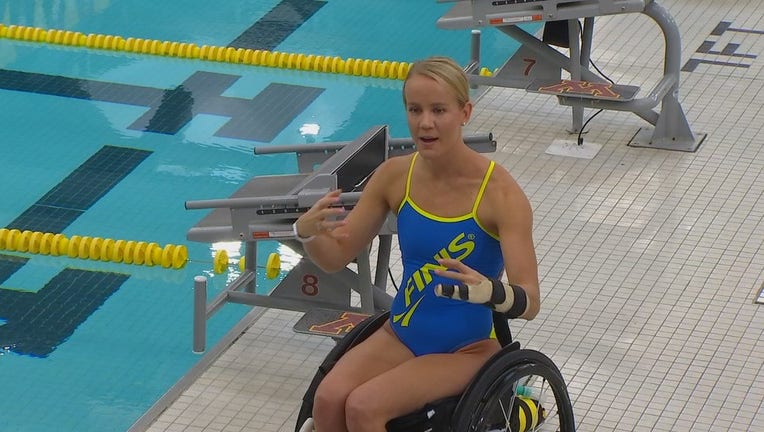 Paralympic champion Mallory Weggemann will compete at the 2020 Olympic trials in Minneapolis next June.

MINNEAPOLIS (FOX 9) - From the Super Bowl to the Final Four, Minneapolis has played host to a number of national sporting events, and the next one is the U.S. Paralympic trials.

“There is something special about representing your country on the world scale,” said Minneapolis Mayor Jacob Frey, of the announcement made Tuesday.

Minneapolis to host U.S. Paralympic trials next June ahead of Tokyo Olympics

From the Super Bowl to the Final Four, Minneapolis has played host to a number of national sporting events, and the next one is&nbsp;the U.S. Paralympic trials.&nbsp;

The road to the 2020 Tokyo Paralympics will run through Minneapolis with team trials scheduled next June. Among the disciplines will be swimming, cycling and track and field.

More than 400 of the country’s top athletes will be heading to Minneapolis for the event.

“I’m really, really thrilled that we’re going to host the biggest celebration and competition of our Paralympic athletes in 2020,” said Julie Duslier.

Having hosted the X Games, the Super Bowl and the Final Four, a number of Minneapolis sporting venues - including the Jean K. Freeman Aquatic Center at the University of Minnesota - are now gearing up for the big event.

For Minnesota native and two-time Paralympian swimmer Mallory Weggemann and Paralympic long-jumper Lex Gillette, they are in it to win it, but know the games are about more than competition.

“It also opens up a great opportunity for the community to get involved, and I think that having three sports going consecutively at once allows people to be exposed to the Paralympic movement in a way that hasn’t been done before,” Weggemann said.

“With all of the incredible stories and incredible athletic talents, I promise you that you are going to have a huge treat next summer,” Gillette said.

There will be three days of competition when the event kicks off next summer.