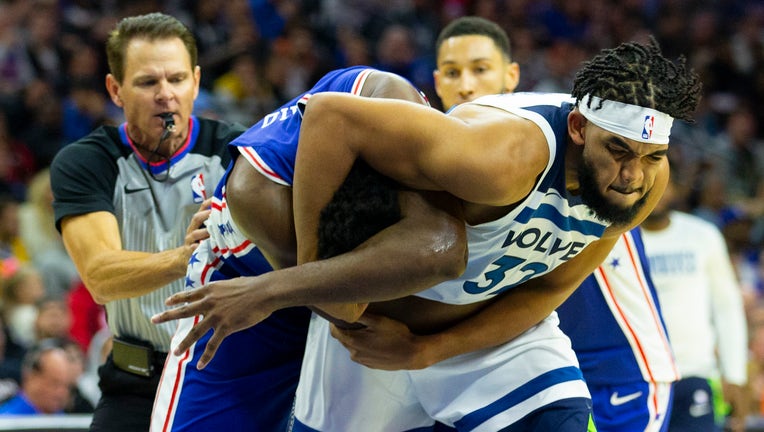 PHILADELPHIA, PA - OCTOBER 30: Joel Embiid #21 of the Philadelphia 76ers gets in a fight with Karl-Anthony Towns #32 of the Minnesota Timberwolves in the third quarter at the Wells Fargo Center on October 30, 2019 in Philadelphia, Pennsylvania. (Phot

PHILADELPHIA (FOX 9) - Minnesota Timberwolves star Karl-Anthony Towns and Sixers center Joel Embiid both got tossed from the game Wednesday evening after the two All-Stars got into a tussle that sent both men to the ground and had players, coaches, and refs running to separate the two.

Halfway through the third quarter, Embiid and Towns started jostling after a turnover by Towns, and the scuffle sent both players to the ground. On the play, Towns had a mismatch on Ben Simmons when Embiid rushed over to trap.

When headed back up the floor, both players had their arms hooked around each other's, which led to grabbing and Towns eventually putting Embiid into a headlock.

Other players and coaches then rushed into to break up the fighting bigmen who were sprawling on the ground. Eventually, Embiid was pulled away but the struggle left Simmons ontop of Towns with Simmons arm around Towns' neck.

After clearing the floor, the officials ejected both Towns and Embiid. It's not clear at this time if either players will face additional suspensions for the fight.

That was not the end of it, however. Shortly after the game, Embiid took the feud to Instagram, referring to Towns as a cat, a play on his nickname KAT, and brought up their mutual former teammate, Jimmy Butler, who requested a trade from the Timberwolves last season and ended up with the 76ers.

Towns responded with an Instagram post of his own, posting a series of photos from the fight cumulating with a photo of Embiid crying after Game 7 of the Eastern Conference semifinals last season. He tagged the post "All Bark & No Bite."

Towns was named the Western Conference Player of the Week for his superb start to the year that has the Wolves off to a 3-0 start prior to Wednesday's game.