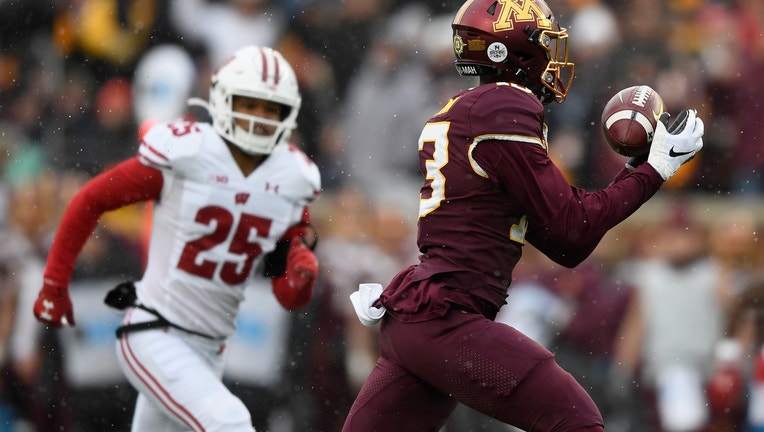 MINNEAPOLIS, MINNESOTA - NOVEMBER 30: Rashod Bateman #13 of the Minnesota Golden Gophers catches the ball against the Wisconsin Badgers during the first quarter of the game at TCF Bank Stadium on November 30, 2019 in Minneapolis, Minnesota. Bateman s ((Photo by Hannah Foslien/Getty Images))

MINNEAPOLIS - The University of Minnesota football team will get to face its biggest rival after all on Saturday, and Gophers’ coach P.J. Fleck couldn’t be happier.

It’s Champions Week for the Big Ten. The original intent was for the division winners to meet for the Big Ten title, which will happen as Ohio State faces Northwestern. After that, the No. 2 teams in the West and East would play, and so on. But that all changed when several teams, including the Gophers, had to cancel games due to COVID-19 issues.

Michigan won’t get to play Ohio State, Indiana’s game against Purdue has been canceled. But all is right for Minnesota, regardless of the outcome, when the Gophers get to play Wisconsin. They’ll meet at 3 p.m. Saturday after the original Nov. 28 game had to be canceled.

Fleck and Mark Coyle made it clear to the Big Ten in recent weeks they’d rather face the Badgers than a team from the East to close out the season.

“When you looked at it, somebody asked me how much lobbying have you done? It just made sense,” Fleck said Monday. “There’s so much history and tradition between these two teams. I’m just glad and thankful that the Big Ten thought the same way and found a way to keep that tradition and that rivalry going. That’s what college football is all about.”

It’ll be the 130th meeting between the two teams, one that’s been played every year except once since 1906. Fleck saw first-hand two years ago how beating a rival can invigorate the local fan base. The Gophers went to Camp Randall Stadium and beat the Badgers 37-15.

The Gophers arrived home to a celebration at their football facility, and Fleck took a podium to address fans as if he’d just won an election.

Fleck pulled off his latest piece of magic last week, going to Nebraska and earning a 24-17 win over the Cornhuskers. The Gophers were without 33 players due to COVID-19 issues and injuries. They dressed 55 players, 22 of which were freshmen. They had three offensive linemen making their first starts, they played just six defensive linemen and had one tight end with playing experience.

“There was an enormous challenge, and I thought our players took the challenge head-on,” Fleck said.

There are 18 seniors on the Minnesota roster, and Saturday could mark their final game in a Gophers’ jersey if they don’t play in a bowl game. Or does it? Due to the COVID-19 pandemic, every player has the option to return next season if they so choose. Fleck said he’s had ongoing conversations with every senior, and he expects most of them to be back for 2021.

Those that don’t will get some sort of send-off. The Gophers didn’t get a Senior Day, they had to cancel their final home game against Northwestern due to COVID-19 issues.

“I think everything was done right by them by giving them an extra year of eligibility. Prior to the season I met with every single senior of what their plans are. For the most part, I think we’re going to have most of them if not close to all of them back, which is really exciting,” Fleck said.

The Gophers and Badgers are headed in opposite directions as the season comes to a close. Minnesota (3-3) has won two straight games, played 22 days apart due to COVID-19. Since starting 2-0, the Badgers had two games canceled and have lost three straight.

If the Gophers beat the Badgers, they could qualify for a bowl game. But nobody knows anything about bowl games yet, other than the College Football Playoff, due to COVID-19. Fleck said they will cross that bridge when it approaches, and it’ll be a group decision that includes President Joan Gabel, Coyle and everyone associated with the football program.

They’re immediate concern is bringing Paul Bunyan’s Axe back to Minneapolis, after losing to Wisconsin last year 38-17 with the Big Ten West title on the line and College GameDay in town.

“One hundred percent of our focus, my focus, our attention is on Wisconsin, period. If and when you get to a bowl game, that’s going to be done as a group decision, I know that,” Fleck said. “What we do know is we have a game on Saturday for Paul Bunyan’s Axe. That’s where all of our focus is going to go.”