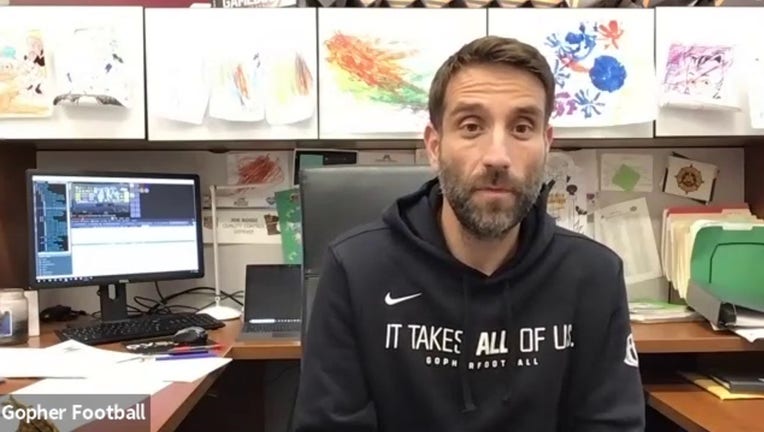 MINNEAPOLIS - Joe Rossi could crack a smile Wednesday and enjoy the fact that he was back in his office at the Larson Football Performance Center on the University of Minnesota campus.

He couldn’t say the same last Saturday as the Gophers football team earned its first victory of the season, beating Illinois 41-14. The team was in Champaign, Ill., and Rossi was on the couch in his home watching the game with his family.

The Sunday after the Gophers lost 45-44 in overtime at Maryland, Rossi took a COVID-19 test like he, his coaching colleagues and all players do daily. His came back positive. He was sent home and went into quarantine. He coached virtually all week leading up to the game at Illinois, then let the team handle the rest.

“I was a fan, I was on a couch watching with the family, and I thought coach Harasymiak did a great job. I thought the defensive staff did an elite job, everyone did an elite job stepping up, was proud of the players to be able to go out and get a win. It was different, I’ll leave it at that,” Rossi said Wednesday via Zoom.

With Joe Harasmyiak calling the plays, Minnesota had its best defensive game of the season. The Gophers limited Illinois to just 287 total yards, sacked Coran Taylor four times and limited the Illini passing game to 106 yards and 14 first down. The Minnesota defense forced eight Illinois punts.

Rossi said Wednesday he experienced cold-like symptoms while in quarantine, but received medical clearance this week to return to his office. Gophers’ coach P.J. Fleck on Monday said did not have a status update on Rossi for Friday night’s game against Iowa at TCF Bank Stadium, but said they would follow all Big Ten and state health guidelines for Rossi’s return.

Rossi holding a media session with reporters Wednesday on Zoom indicates he’ll be back on the sidelines Friday night, assuming he remains in good health.