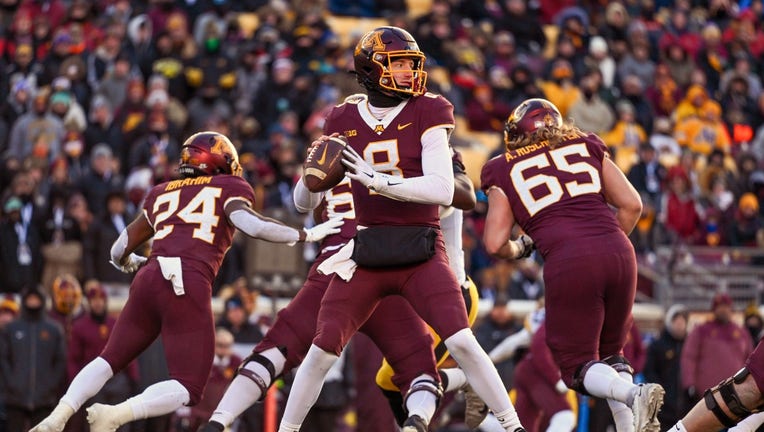 MINNEAPOLIS - The University of Minnesota football team closes out its 2022 regular season at rival Wisconsin Saturday, and Athan Kaliakmanis will get this third straight start at quarterback.

That's according to a report from the Pioneer Press. Sixth-year senior Tanner Morgan has not played since suffering an upper body injury late in the first half at Nebraska on Nov. 5. Kaliakmanis led the Gophers to four second half scoring drives in that game, a 20-13 come-from-behind win over the Cornhuskers.

The Gophers close out the regular season Saturday at Wisconsin, and Pierre Noujaim sat down for a 1-on-1 this week with sophomore defensive back Justin Walley.

Kaliakmanis was 7-of-15 passing for 87 yards in last week’s 13-10 loss to Iowa in the annual battle for Floyd of Rosedale. He was 4-for-4 on Minnesota’s lone touchdown drive, and likely wants two throws back from that loss. Near the end of the first half, he had Brevyn Spann-Ford open for a walk-in touchdown, but had already moved off the tight end. The play ended up an incomplete pass over the middle, followed by a missed field goal from Matthew Trickett.

With the Gophers driving for a potential go-ahead score in the fourth quarter, Kaliakmanis had a pass for Lemeke Brockington broken up by Riley Moss, and intercepted by Jack Campbell. It set up the Hawkeyes’ game-winning field goal.

Kaliakmanis is likely the future for the Gophers at quarterback, but will also need to use his legs against the Badgers on Saturday and get help from receivers in making contested catches. Wisconsin will key in on containing Mo Ibrahim, who needs 103 yards to pass David Cobb’s single-season rushing record, and 128 to pass Darrell Thompson’s all-time rushing record.

The Gophers' defense will be without star safety Tyler Nubin at Wisconsin, due to a broken hand/wrist suffered against Iowa. Nubin is second on the defense with 55 tackles, and leads the team with four interceptions. Nubin walked on Senior Day, which might be a sign that this is his last year with Minnesota. He has one year of eligibility remaining, if he chooses to return next season.

The Gophers are looking to beat Wisconsin in consecutive years for the first time since 1993-94. A win and Minnesota would finish 8-4, and await their bowl destination. The Gophers were eliminated from Big Ten West title contention after last week’s loss to Iowa.