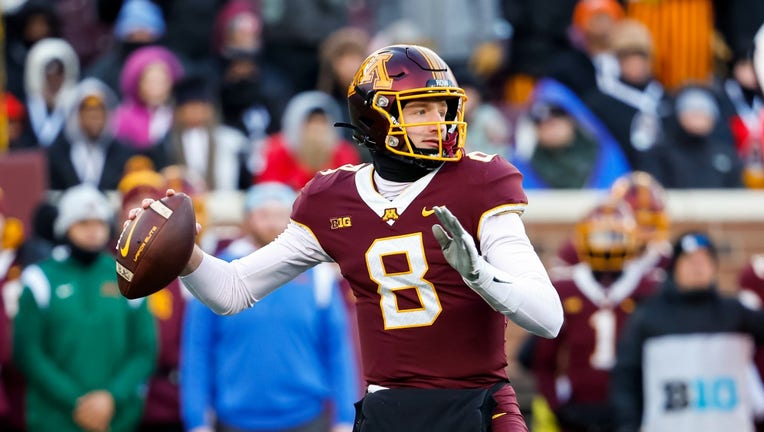 Mohamed Ibrahim #24 of the Minnesota Golden Gophers runs with the ball against the Iowa Hawkeyes in the second quarter of the game at Huntington Bank Stadium on November 19, 2022 in Minneapolis, Minnesota.  ((Photo by David Berding/Getty Images))

MINNEAPOLIS - The University of Minnesota football team will conclude the 2022 regular season with a 2:30 p.m. kickoff at Wisconsin that will air on ESPN.

The Gophers are coming off a heartbreaking 13-10 loss to Iowa on Senior Day at Huntington Bank Stadium. Mo Ibrahim had 39 carries for 263 yards and a touchdown, but fumbled with five minutes to play as Minnesota was driving for a go-ahead score. After getting the ball back, Athan Kaliakmanis had a pass in Iowa territory intended for Lemeke Brockington broken up by Riley Moss, and intercepted by Jack Campbell.

PJ Fleck speaks to reporters after Gophers loss to Iowa: 'We had our chances'

Gophers coach PJ Fleck speaks with reporters after Saturday's 13-10 loss to Iowa on a frigid day at Huntington Bank Stadium.

The Hawkeyes took the turnover and kicked a game-winning field goal with 28 seconds to play. The Gophers ran for 312 yards, had nearly 400 total yards and still lost. It was Minnesota’s eighth straight loss to Iowa, and PJ Fleck is now 0-6 against the Hawkeyes as Floyd of Rosedale heads back to Iowa City.

The glaring issue for the Gophers after 11 games: The lack of a passing attack. Kaliakmanis was 6-of-7 in the first half, including four completions on Minnesota’s lone touchdown drive of the day, but he completed just one pass in the second half.

Minnesota beat Wisconsin 23-13 last season, and celebrated with fans on the field to the song "Jump Around" after, a staple of Badgers' games at Camp Randall before the start of the fourth quarter.

Regardless, the 2022 season will go down as one of missed opportunities as the Gophers couldn’t capitalize on a legitimate chance to contend in the Big Ten West. Next year, Minnesota’s schedule includes Michigan and Ohio State as crossover games.