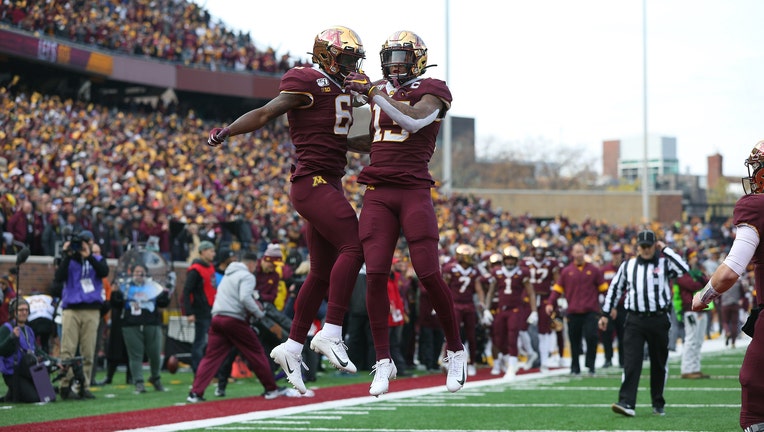 MINNEAPOLIS, MN - NOVEMBER 09: Rashod Bateman #13 of the Minnesota Golden Gophers celebrates his touchdown with Tyler Johnson #6 of the against the Penn State Nittany Lions in the first quarter at TCFBank Stadium on November 9, 2019 in Minneapolis, M ((Photo by Adam Bettcher/Getty Images))

MINNEAPOLIS (FOX 9) - The Minnesota Gophers wide receivers are cleaning up big as the annual Big Ten conference honors come out.

Rashod Bateman, a sophomore, was named the Big Ten's Richter-Howard Receiver of the Year. He is the first Gopher in school history to win the honor. Bateman and senior Tyler Johnson also were both named to the First Team All-Big Ten. It's believed to be the first time in conference history that the two wide receiver spots on the First Team went to players from the same school.

Quarterback Tanner Morgan, a redshirt sophomore, and running back Rodney Smith, a redshirt senior, were named to the All-Big Second Team. In 12 starts, Morgan completed 66 percent of his passes for 2,975 yards and 28 touchdowns, which broke Adam Weber's single-season record of 26. At one point this season, Morgan was one of the top-five quarterbacks in passing efficiency in the country.

Morgan is currently 14-4 for his career as the Gophers' starting quarterback.

The Gophers finished the season 10-2 overall, and will learn their bowl game destination this weekend. It's the first time Minnesota has won 10 games in a regular season since 1905, and the first time the Gophers have ever won seven games in the Big Ten.