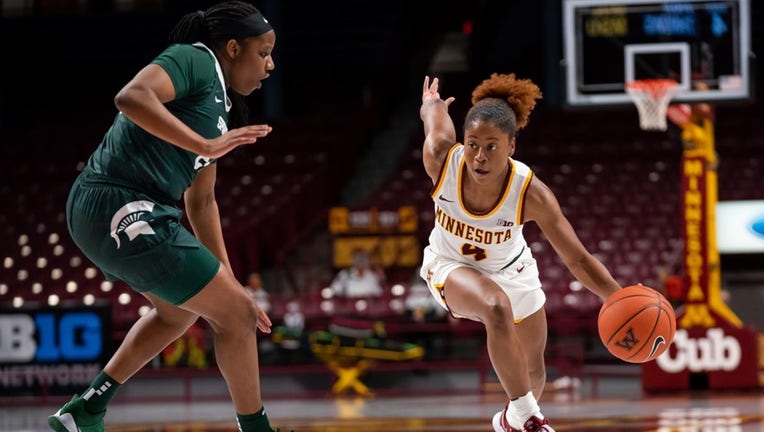 Jasmine Powell leads the Gopher women's basketball team in scoring at 16.2 points per game and is second in rebounding. ((credit: University of Minnesota Athletics))

MINNEAPOLIS - Nearly a week off couldn’t have come at a better time for the University of Minnesota women’s basketball team.

Lindsay Whalen’s Gophers were supposed to play at Michigan Thursday night, but the game was postpone after Michigan athletics were put on a 14-day pause due to COVID-19 issues on campus. The Gophers used the week to heal some sprained ankles, and Whalen met with her players to talk basketball, and college life amid COVID-19.

She joked Friday she’s happy to travel to Ohio State this weekend as subzero temperatures invade Minnesota after a relatively mild winter. But the jokes didn’t last long. The Gophers face the No. 11-ranked Buckeyes after having a three-game win streak snapped against Iowa.

Starting Sunday, Minnesota has five games over a 13-day stretch.

"Just prepare everybody for the stretch run. Let’s make a February push, we’ve put ourselves in a position to be kind of towards the middle of that pack," Whalen said. "Let’s see if we can’t leapfrog a few more times and get ourselves a favorable seed in the Big Ten Tournament."

The Gophers are 5-8 overall, 4-7 in the Big Ten, which is currently 10th in the league. They got their first Big Ten win at Wisconsin, then lost three straight. Then, the roster got healthy in wins at Nebraska, Penn State at against Purdue.

Whalen and the Gophers were dealt more adversity during that stretch. At the end of the Penn State game, Gadiva Hubbard went down with an injury. She scored 18 points before getting hurt, then Sara Scalia carried Minnesota the following game with 30 points in a win over Purdue.

Jasmine Powell, freshly out of a boot herself from a sprained ankle, said it was important this week to get time off to heal before a busy stretch.

"It’s hard but we use these days very carefully to work on ourselves to make sure we’re ready for those days. We’re definitely prepared for what’s coming, we knew it was going to happen," said Powell, who leads the Gophers with 16.2 points per game and is second in rebounding.

The Gophers have won three out of their last four, are looking for their third straight road win and Whalen doesn’t know yet if Hubbard, their No. 4 scorer, can play Sunday. A road win over a top 15 team could do wonders after a long week.

"We play Sunday and we play three games next week. Making the best out of an unfortunate situation of having to postpone a game due to COVID, but we tried to use it really wisely this week," Whalen said.