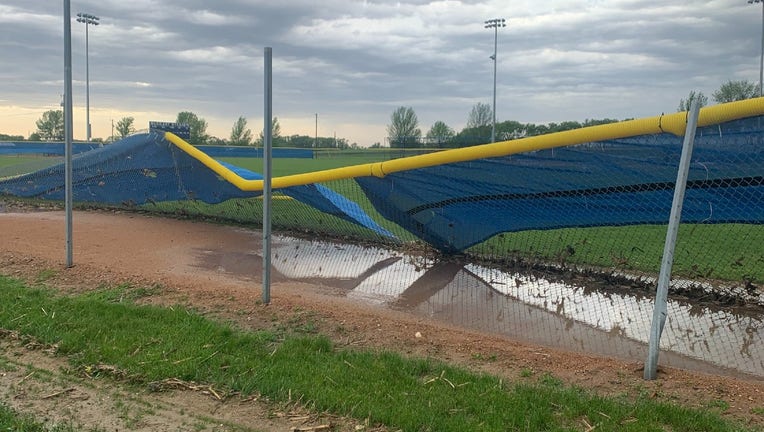 MINNEAPOLIS - Mother Nature put a stop to one day of baseball in Plato, but it won’t slow down the FOX 9 Town Ball Tour.

Monday’s severe storms caused widespread damage in Minnesota, with Forada, a small town near Alexandria, being one of the hardest-hit communities. Storms also caused a mess in Plato, about 40 miles southwest of the Twin Cities metro. The Plato Blue Jays were set to host the Hamburg Hawks in Crow River Valley League action, but the game was canceled after storms caused significant damage at Blue Jay Stadium.

High winds caused damage to the outfield fence, and it put the status of Wednesday night’s game against Gaylord in Jeopardy. Team officials and volunteers are spending Tuesday cleaning up the damage, and they’re confident the game can go on as planned with the FOX 9 Town Ball Tour coming to town.

High winds also caused damage to farms in the town. At least one farmhouse was damaged when a large tree fell on it.

Plato is off to a 4-1 start. Last week's game at Veseli was postponed for one day after rain made field conditions unplayable. The Fox 9 Town Ball Tour is in Week 3, after stops in Cologne and Veseli to start a summer of celebrating amateur baseball in Minnesota.