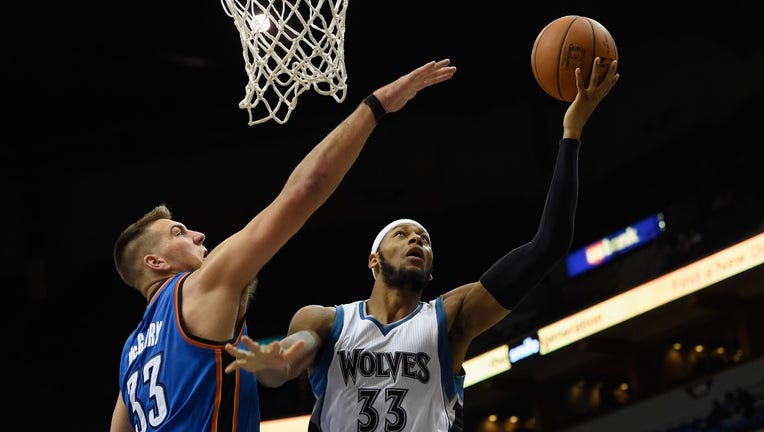 Adreian Payne #33 of the Minnesota Timberwolves shoots a basket against Mitch McGary #33 of the Oklahoma City Thunder during the fourth quarter of the preseason game on October 7, 2015 at Target Center in Minneapolis, Minnesota. The Thunder defeated ((Photo by Hannah Foslien/Getty Images))

Payne, and Ohio native, was the No. 15 overall pick by the Atlanta Hawks in the 2014 NBA Draft. He played three seasons with the Minnesota Timberwolves, from 2014-17, and appeared in 99 games with 24 starts. Over that time, he averaged 4.1 points and 3.1 rebounds.

The Timberwolves released a statement on Payne's death Monday afternoon.

"We are devastated to learn of Adreian Payne's passing. His family members and friends remain in our thoughts and prayers," team officials said.

He played with the Orlando Magic in the 2017-18 season, and most recently played in Lithuania last year with Juventus Utena. Payne won championships in Greece in 2018 and 2019.

In addition to earning All-Big Ten honors twice with the Spartans, Payne is known for developing a friendship with Lacey Holsworth, and 8-year-old girl he met on a hospital visit who was battling cancer. The two met in 2013, and she died in April of 2014, a month after Payne helped lead Michigan State to a Big Ten Tournament title. Holsworth helped Payne cut down the net to celebrate the championship.

The Orange County Sheriff’s Office responded to a report of a man shot at about 1:37 a.m. Monday. The victim, later identified as Payne, was taken to a hospital where he was later pronounced dead.

Authorities arrested a 29-year-old suspect, identified as Lawrence Dority, at the scene on suspicion of first-degree murder.