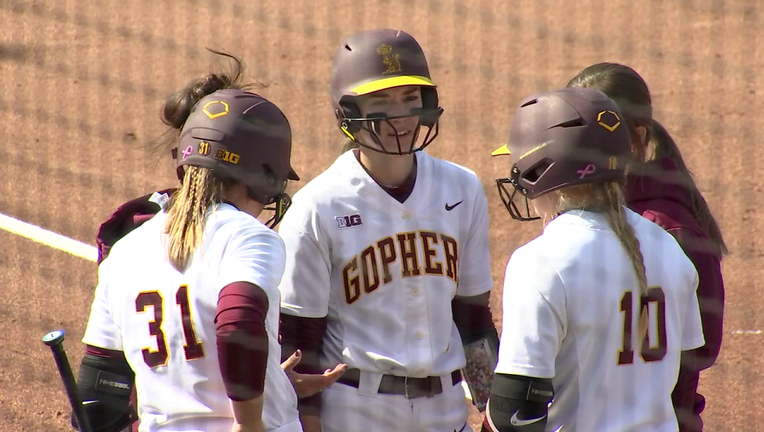 MINNEAPOLIS - After being an All-American with the University of Minnesota softball team in 2013 and 2014, Katie Richardson is coming home.

Gophers’ softball coach Piper Ritter recently announced Richard has been hired as an assistant to fill out the coaching staff. She joins the Minnesota staff with Carly Wynn, who was named associated head coach. Those two crossed paths in 2017 and 2018 as they were both assistants at Arizona State. Richardson was a volunteer assistant in 2017, and was elevated to an assistant coach in 2018. She oversaw infielders and hitters, and helped led the Sun Devils to the Women’s College World Series in 2018.

After being an All-American with the University of Minnesota softball team in 2013 and 2014, Katie Richardson is coming home.

"As a player, I always envisioned myself returning to the University of Minnesota to coach the Gophers one day," Richardson said. "Thanks to Coach Ritter, this dream has become a reality. I am so grateful to her, Mark Coyle and the entire administration for the opportunity to coach at my alma mater and help take the Gophers back to the Women's College World Series. My time at Minnesota was special and I can't wait to share that experience with our current student-athletes, along with our future Gophers, and engage with the wonderful alumnae from all eras."

After two seasons at Arizona State, Richardson was a special assistant to the athletic director at Ball State for one year. Her duties included managing donor events, working to create a new strategic plan for the athletic department and running a marketing plan to increase fan attendance at major sporting events.

From 2012-15, Richardson was one of the top players in Gophers history. She started 224 career games and set Minnesota records with 138 walks, 64 doubles and a .678 slugging percentage. She’s second in program history with 179 RBI, third with a .388 batting average and fourth with 40 home runs.

Richardson spent two years with the Dallas Charge of the National Professional Fastpitch League before serving as an undergrad assistant at Minnesota in 2016.

The Gophers were 15-9-1 in their 2019-20 season before it was canceled due to the Covid-19 pandemic. Since then, Jamie Trachsel left the team to take the head coaching job at Ole Miss, and Ritter was named head coach.