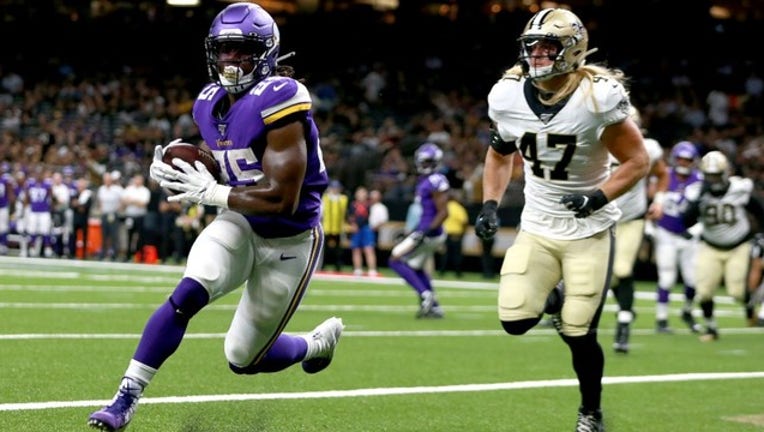 MINNEAPOLIS - Alexander Mattison is just 18 games into his NFL career, but he’s in line to get his first start Sunday as the Minnesota Vikings host the Atlanta Falcons at U.S. Bank Stadium.

For the second straight day, top running back Dalvin Cook did not practice on Thursday at TCO Performance Center. Cook suffered a left groin injury on the Vikings’ first offensive play of the third quarter in last Sunday’s 27-26 loss at Seattle. He went to the locker room, came back and went in for one more play before standing on the sideline the rest of the game.

Mattison finished with 20 carries for 112 yards, the first 100-yard game of his career. With Minnesota’s bye week looming after playing Atlanta, it might be in the team’s best interest to let Cook rest and heal. As he was last Sunday, Mattison’s biggest fan on the sideline will be Cook.

“You’ve seen what he can do. Enough things have been said, but to be proven, Deuce is going to go out there and represent the whole group,” Cook said.

There’s one rushing attempt Mattison would probably love to have back from last Sunday. Facing a 4th and 1 with a chance to seal a win over the Seahawks, Mattison was stopped short of a first down. If he bounces the run to his right, he likely gets the first down at the very least, if not walks into the end zone.

It’s a learning process for the second year running back.

The Vikings used a second round pick on Mattison last year. Latavius Murray had left in free agency, and the Vikings needed a compliment to Cook in the run game.

Cook thinks Mattison is a bigger version of himself. Mattison considers the duo a two-headed monster. Cook may be the clear-cut No. 1 running back, but the Vikings feel they can still run the ball with Mattison if he’s on the sideline resting or injured.

“I don’t feel like there’s a lot of limitation there in terms of area of the offense. He can run the football, he can pass protect, he can catch the football, he can run all the routes. He knows the game plans inside and out, so you’re able to run your offense,” quarterback Kirk Cousins said. “Having depth there is a great help.”

Mattison runs downhill, he’ll take defenders on. He also has the speed to get past defenders, and he’s shown his track skill on multiple occasions by hurdling would-be tacklers.

He’s averaging nearly five yards per carry this season, and his versatility has the attention of his teammates.

“It’s amazing to see. He can run over somebody and he can out-run somebody, so to have somebody to back up Dalvin that’s that good, that strong, that big and able to run like that is great to have,” receiver Justin Jefferson said.

Nothing will change for Mattison this week. He’ll practice like he always does, and he’ll be ready if Cook can’t go. For him, it’s just another opportunity. But it’s also a chance for him to prove he’s ready to be the primary running back, and get the majority of the carries in an offense that thrives on running the ball.

“It’s obviously something that as a running back, the more touches you get, the more you can get into a rhythm so it’s awesome to have that experience. Now I’ll take that into this week as we go onto get Atlanta,” Mattison said. “Just go out there and take the experience that I do have and the opportunities that I get, and we go out there and we try to put on a show and execute.”