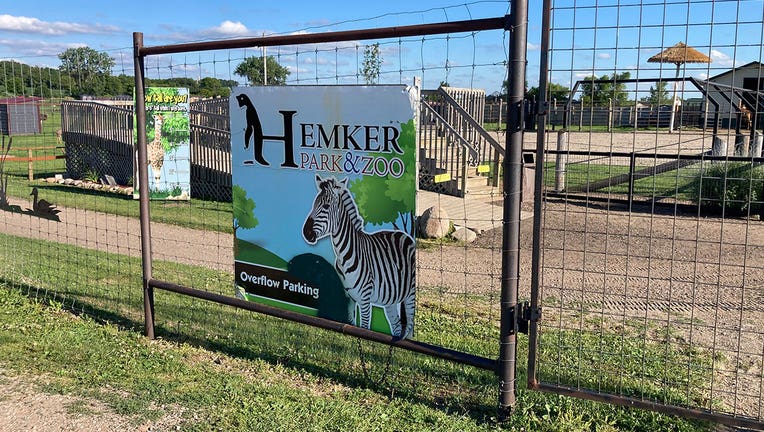 The Hemker Park and Zoo in Freeport, Minn. (FOX 9)

FREEPORT, Minn. (FOX 9) - A zoo worker had to be airlifted to a hospital after being bit by a camel Wednesday in Stearns County, deputies report.

According to the sheriff's office, crews responded around 2:45 p.m. for the reported attack at the Hemker Park and Zoo near Freeport, Minnesota.

Deputies learned that the worker, identified as 32-year-old Roger Blenker, had been escorting the camel through an alleyway to be transported to another facility when the camel bit Blenker's head. Deputies say the camel dragged Blenker by the head about 15 feet before a second employee was able to intervene. That employee, identified as 32-year-old Seth Wickson, placed a plastic board into the camel's mouth to get it to release its bite.

The animal ultimately let go of Blenker, who was able to run to safety, but charged at Wickson and bit Wickson's head. Wickson was able to get free and to a safe location and did not require medical treatment.

Blenker was airlifted to St. Cloud Hospital for treatment. Deputies say his condition is unknown. However, in a statement, the zoo said one of its owners had been hurt in the attack but was expected to survive his injuries.

"At 2:37 p.m. today during normal zoological operations there was an interaction between one of our owners and a camel," the statement reads. "Our owner did sustain minor injuries and is expected to make a full recovery. The camel was not injured during the interaction and remains in good health. We thank you all for your continued support."

FOX 9 attempted to reach out to the zoo earlier in the afternoon for information on the attack but the person who answered the phone said she was unable to comment.