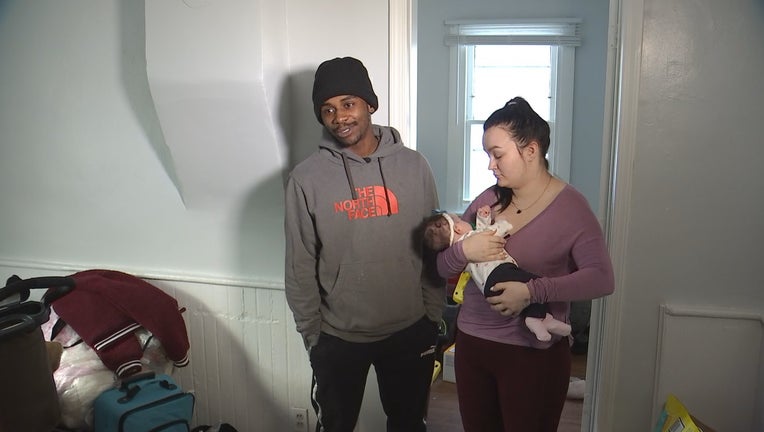 Jamal Jones, Alliyah Ross, and their two-month-old Chanel now have a place to stay. (FOX 9)

ST. PAUL, Minn. (FOX 9) - After a massive fire at a downtown Minneapolis hotel ripped their world apart, a young couple is finally getting back on their feet.

The fire at the Drake Hotel disrupted life for hundreds of people on Christmas Day 2019. The former hotel, which was torn down following the fire, is still a pile of rubble but those who lived there are slowly putting their lives back together.

After a massive fire at a downtown Minneapolis hotel ripped their world apart, a young couple is finally getting back on their feet.

Officials say all 272 people who lost their home in the fire now have shelter, including some with permanent homes, like Jamal Jones, Alliyah Ross, and their two-month-old Chanel.

For most people, moving day isn't a lot of fun, for this family, it's something they've been looking forward to.

"This is honestly one of the best days of my life," said Ross.

On Christmas Day, as flames broke out in the Drake Hotel, the family was able to escape with just a few of the baby's things. However, everything else from the first place they ever called home had been destroyed.

"We had lived on peoples' couches for over a year or just in different not good situations, and the Drake really was the first place we had a key and could close the door behind us," said Ross.

After the fire, they moved from the Red Cross shelter to hotels, trying to keep a good attitude.

"We always kept our heads up," said Jones. "I don’t really let anything hit me; I just like to focus on positive things."

However, that hasn’t always been easy.

"It was hard, we had to go to the county or to the church or different meetings to get all this stuff situated, and carrying around a two month old is difficult," explained Ross.

When they finally found their new home, it was emotional for Ross.

"I literally cried," she said. "I was at the bus stop waiting for the bus just looked at him and started crying."

They found an apartment in St. Paul that was available. Friday, they were able to move in.

"Out of such a horrible event, this is the best thing that could’ve come out of it," said Ross.

Using money from the Pillsbury United Communities and the county, they were able to cover the security deposit and first month's rent. Jamal also has two jobs set up to get back to work soon.

Meanwhile, the county says they are still working on permanent housing for other residents.

Pillsbury United Communities, who received money through a fund with the Minneapolis Foundation set up to help families, says each of the former Drake residents have received some money from the fund.

In the days following the emergency, the group distributed $97,000 in funds for immediate assistance. Since then, $106,394 has been paid out to help pay for permanent housing for families.

Pillsbury United says they will continue to distribute money to families as they work to find permanent housing for all the former Drake Hotel residents.