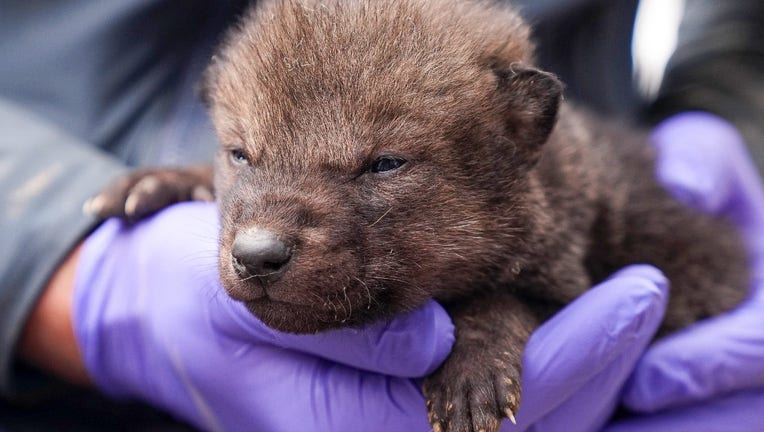 (FOX 9) - The Voyageurs Wolf Project has tagged its first wolf puppies of the 2022 season.

The Voyageurs Wolf Project, which studies wolves in and around Voyageurs National Park in far northern Minnesota, on Tuesday shared photos of two pups from the Half-Moon Pack, which it tagged on Monday.

While researchers only found two pups, the den the pups were using had "a long-reaching, pup-sized tunnel that goes way back into the abyss," the Voyageurs Wolf Project said on Facebook. Because of this, researchers suspect there are more pups in the den.

The wolf pups researchers tagged on Monday were "quite small," weighing about 1 kilogram, which is about 40-60% smaller than previous litters at this same time of year. The Half-Moon pups that were tagged on April 29, 2020, weighed between 2.4-2.6 kilograms, and the pups tagged May 5, 2021, weighed between 1.7-1.9 kilograms.

"Much of the smaller size has to do with when the pups were born. Specifically, the pups were likely born later this year than typical," the Facebook post said. "We will be interested to see how many pups end up surviving."

The Voyageurs Wolf Project is a research project from the University of Minnesota that studies the behavior of wolves in the summer in order to better understand their predation behavior and reproductive ecology.