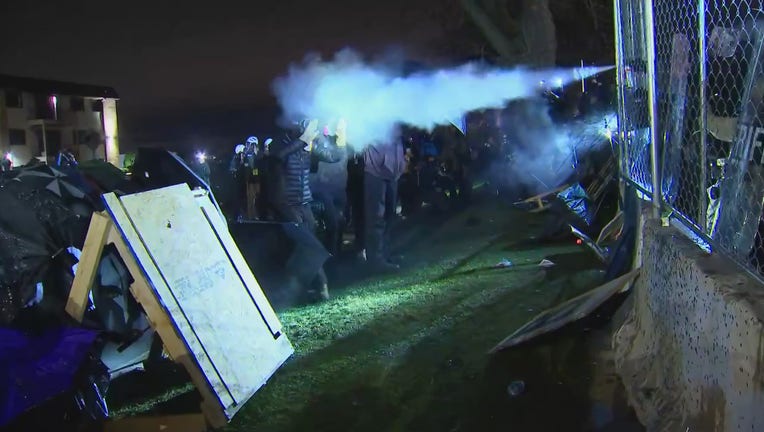 BROOKLYN CENTER, Minn. (FOX 9) - Officials at the highest levels of state government have supported the use of tear gas and nonlethal munitions in Brooklyn Center during this week's unrest to avoid the burning of a second Minnesota police station in a year, Gov. Tim Walz said Thursday.

The Minnesota National Guard, State Patrol and local police have turned back attempts to overrun the Brooklyn Center Police Department, which has been heavily fortified since Sunday's police killing of Daunte Wright, a Black man shot by a now-former police officer during a traffic stop.

The defense of Brooklyn Center's police station following the shooting of Daunte Wright is drawing battle lines between the city's mayor and the Hennepin County Sheriff.

The use of tear gas has put community activists and Brooklyn Center's mayor in conflict with law enforcement officials. Responding to the criticism over police tactics, Gov. Tim Walz told reporters he supported the use of gas to protect people or property.

Ten months ago, Walz and Minneapolis Mayor Jacob Frey were criticized when rioters took over and burned the Minneapolis Police Third Precinct during unrest over the killing of another Black man, George Floyd.

This week in Brooklyn Center, people have tried to break down the fence outside the city's police building over Wright's death. The defense of the police station has the city's mayor, Mike Elliott, and Hennepin County Sheriff Dave Hutchinson at odds.

Wednesday, Elliott told reporters that "gassing, in my opinion, is not a humane way of policing." The Brooklyn Center City Council has passed a resolution banning its police from using gas during the unrest.

The ban doesn't apply to outside agencies. And Hutchinson, who has operational control of the police response under a multi-jurisdictional command called Operation Safety Net, leveled his own criticism of Elliott.

"The city's actions since Sunday evening have created significant confusion," Hutchinson wrote in a letter obtained by FOX 9. This week, the Brooklyn Center City Council has fired the city manager, and police chief Tim Gannon resigned under pressure.

Walz said he was aware of the tension but indicated no plans to step in.

"Candidly, we're hearing that -- obviously," Walz said of the tension. "I will say, people are working together in a very professional manner."

While he said he has ultimate responsibility for the tactical response, Walz seems determined not to be the face of the operation.

The governor has not appeared with Elliott and has not gone to Brooklyn Center. He spoke briefly at a law enforcement news conference on Monday, but his two other public events this week were focused on the COVID-19 pandemic.

Walz said he has spoken privately with the mayor and called Katie Wright, Daunte Wright's mother, on Wednesday. He said he has given guidelines to law enforcement on the limited use of chemical agents.

"Mayor Elliott was thrust into a situation that no mayor in America (is in) – I don’t care if they’re the mayor of New York City, Los Angeles or smaller communities," Walz said. "(It's) an untenable situation of scrutiny that’s there, trying to protect his citizens, trying to deal with the trauma, and I think they are doing the very best they can."