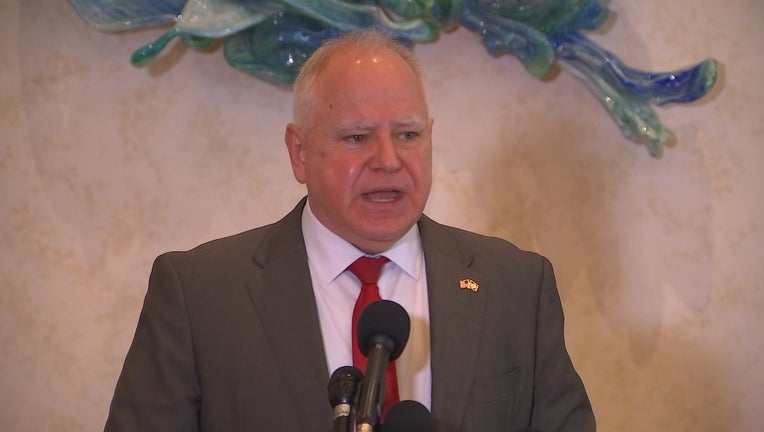 Gov. Tim Walz is giving no indication that he'll move to lift Minnesota's coronavirus-related business restrictions soon, even as virus metrics plummet to their lowest levels in months.

Republicans are calling on Walz to let businesses fully reopen at least by May 1, but Walz declined to pick a target date. The governor has imposed capacity limits on thousands of businesses, though he has ended forced closures that were in place over the holidays.

"I don’t think you can ever set the date on this, but I feel their sense of urgency," Walz told reporters asking about the issue this week. "I know especially in the business sector, especially in schools, a date certain is what everybody wants."

When asked by FOX 9 to outline the metrics he's using to make his decision, Walz did not name specific benchmarks.

"If it was as easy as saying, if this hits this, we automatically do it – it’s a combination of things," Walz said.

Representatives from the bar, restaurant and hotel industries said this week they had not gotten any indications from the Walz administration that a relaxation of capacity limits was coming.

"There's been no discussion as far as the numbers being so low, what the next step is going to be as far as opening us up," said Tony Chesak, executive director of the Minnesota Licensed Beverage Association.

Walz and Health Commissioner Jan Malcolm said they were concerned about the spread of virus variants leading to a renewed spike in cases similar to the November surge that strained Minnesota hospitals and killed dozens of people each day.

On Thursday, Minnesota health officials said they had confirmed 18 cases of the strain first discovered in the United Kingdom. Federal officials have said they expect the UK variant to be the dominant strain in the country by March.

Minnesota reported 907 new cases on 43,203 tests Thursday, a positivity rate of 2.1 percent. The threshold for uncontrolled spread is 5 percent, a mark Minnesota has been under since mid-January. The rate briefly reached 15 percent during the November surge.

The state and its health care system have given at least first doses of the coronavirus vaccine to 599,132 people, or 13.9 percent of the state's adult population. Nearly 30 percent of seniors ages 65 and older have gotten at least one dose, health officials said.

The state's divided Legislature has been frozen on how to handle Walz's business restrictions.

This week, the Republican-controlled Senate advanced at least four bills that would strip some of the governor's emergency powers. One measure would ban Walz from closing schools with his pandemic-fighting powers, while another would allow businesses to fully reopen right away as long as they have a COVID safety plan.

But the measures are unlikely to pass the Democratic-led House, which have defended Walz's emergency powers and have advanced their own pandemic-related legislation.

On Tuesday, Democrats held a hearing on legislation to create a statewide mask mandate law, a move endorsed by some doctors and the Minnesota Medical Association. The bill has not gotten a committee vote.