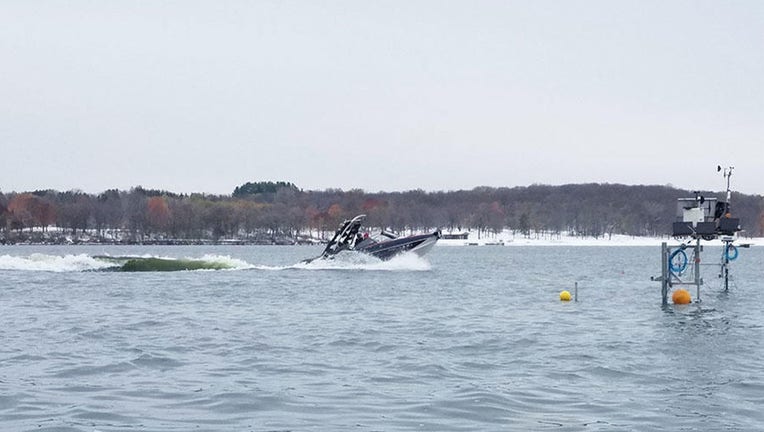 That’s the focus of a new study by University of Minnesota researchers that sought to provide new insight into the differences between wakesurfing and recreational boats operating on lakes and rivers. The baseline date will help to determine future decision-making, researchers hope.

Wakesurfing has become a popular pastime for Minnesotans, while simultaneously causing concerns about potential shoreline erosion, water quality and safety.

Using sensors and data collection hardware researchers measured the maximum height, total energy, and maximum power of wake waves produced by four recreational boats – two wakesurf boats and two more recreational boats. Researchers also measured how the wake waves changed as they moved away from the boats and toward shore. Tests were conducted in fall 2020 under a range of speeds, weight and other conditions on Lake Independence in Maple Plain, Minnesota.

The College of Science and Engineering’s St. Anthony Falls Laboratory found that wake waves produced by wakesurf boats are not only higher, but also require 500 feet more distance to decrease to the same height as recreational boats. Under both slow and fast speed conditions, the wakesurf boats produced the largest waves in terms of height, energy, and power when compared to recreational boats.

As a result, wakesurf boats require a greater distance from both shorelines and other boats compared to recreational ones in order to reduce the potential impact on shoreline erosion.

"Minnesotans love their lakes, and they love their boats," said Jeff Marr, one of the lead researchers on the study and associate director of engineering in a statement. "This research isn't about trying to limit enjoyment of lakes for boaters, but it seeks to provide the data needed to ensure our lakes can be enjoyed by all for generations to come."