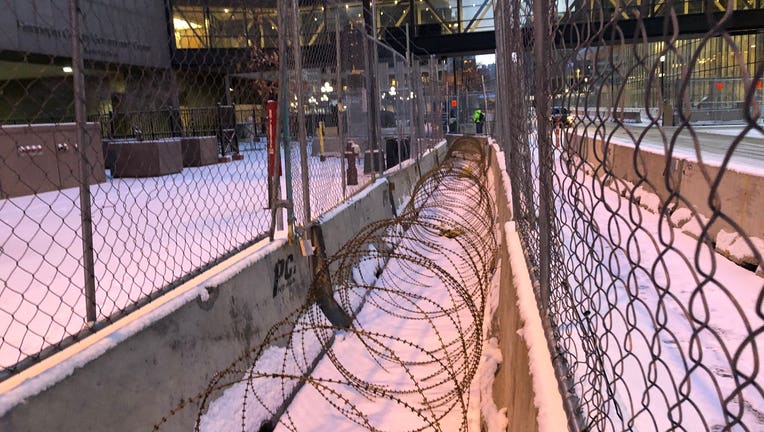 Barricades around City Hall and the Hennepin County Government Center in downtown Minneapolis ahead of the Derek Chauvin trial. (FOX 9)

ST. PAUL, Minn. (FOX 9) - Minnesota legislative leaders say a vote on Derek Chauvin murder trial security funding could happen as early as Monday -- the same day jury selection is scheduled to begin -- while cautioning that an elusive deal is still not in hand.

"If they get me something, I want to sign it," Walz said. "It doesn't have to be exactly what I (proposed)."

Walz's original plan, which the MPPOA endorsed, would've created a $35 million state fund to pay for security at what the governor has said is the highest-profile trial happening in the world in 2021. Chauvin is accused of murdering George Floyd, a Black man who died in May 2020 after Chauvin held him to the ground for several minutes by putting his knee on Floyd's neck.

Walz's proposal was swiftly rejected by lawmakers in both parties. GOP lawmakers blasted it as a "bailout" to Minneapolis, and Republicans who control the Senate countered with legislation to force Minneapolis to pay for outside police help.

Walz's proposal then went down in a House floor vote, a rarity, when six Democrats joined all Republicans in opposition.

The Walz administration has been signing mutual aid agreements with outside agencies to commit hundreds of officers to Minneapolis. While jury selection is scheduled to start Monday, the outside police help would scale up for closing arguments and the verdict later this spring.

Gazelka said he hoped a bill would come to the House and Senate floors early next week, a point that Hortman echoed.