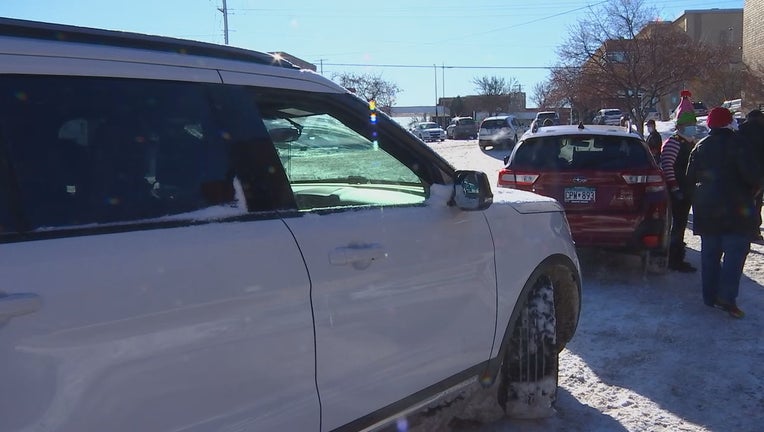 Volunteers lined up on Friday to deliver meals for families in need in the Twin Cities. (FOX 9)

ST. PAUL, Minn. (FOX 9) - Dozens of volunteers were lining up, car by car, at Union Gospel Mission Twin Cities to deliver meals to people in need on Christmas Day.

"It's cold out here, but it’s a good way to feel warmth within ourselves and bring that spirit to other people as well," said volunteer Mary Williams.

Twin Cities church gives out holidays meals for those in need

Dozens of volunteers were lining up, car by car, at Union Gospel Mission Twin Cities to deliver meals to people in need.

Some of these volunteers are used to sitting down and eating with the families they’re serving. The pandemic changed that tradition ,but volunteers want families to know they’re not alone on Christmas.

"We’re usually the type of family that stays home and hangs out with each other on Christmas but we wanted to make sure that in a year like this, that we were out making sure that everybody had at least knew that there was someone that cared," explained volunteer Juliann Cole.

At least 1,200 meals will be distributed to homeless shelters and low-income housing residents across Saint Paul with the help of more than 60 volunteers.

"We have seen a greater need this year, just overall, from people who are finding themselves in some challenging positions," said organizer Abigail Reitz.

Volunteers say gestures such as delivering meals can have a big impact. "To do for someone else that is going to be critical because that might be the only thing that has happened to them and you just never know because even a smile may save a life."