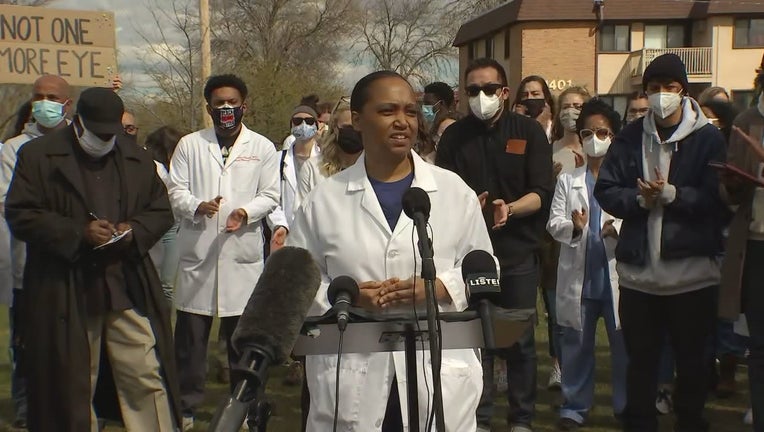 Doctors and medical students came together on Saturday in Brooklyn Center. (FOX 9)

MINNEAPOLIS (FOX 9) - Saturday, after another clash between protesters and police in Brooklyn Center, a group of medical students and doctors from the University of Minnesota rallied against the use of less-lethal weapons on protesters.

During the sixth night of protests, law enforcement members used tear gas, pepper balls, and marker rounds, among other crowd-control methods, to disperse demonstrators on Friday.

University of Minnesota doctors, medical student rally against use of less-lethal weapons on protesters

Saturday, after another clash between protesters and police in Brooklyn Center, a group of medical students and doctors from the University of Minnesota rallied against the use of less-lethal weapons on protesters.

Earlier in the week, police had also used greater force to control large crowds gathered at the police station.

But, while tear gas, rubber bullets, and other weapons might be less lethal, that doesn't make them not dangerous.

Their concerns come following a report they released earlier this year that revealed they saw an increase in traumatic injuries in the eye, neck, and head during protests after the death of George Floyd. Many worry about seeing a repeat of last year with those of injuries and they are urging state leaders to step in stating the projectiles do more harm than good.

FOX 9 also spoke to a protestor who has a severe eye injury after being shot by a rubber bullet this past Tuesday.

"I was shot in the face as you can see," said protester Victor Ramirez. "I have a  fracture. I was told I would have to see a plastic surgeon to see if it heals... well then plastic surgery."