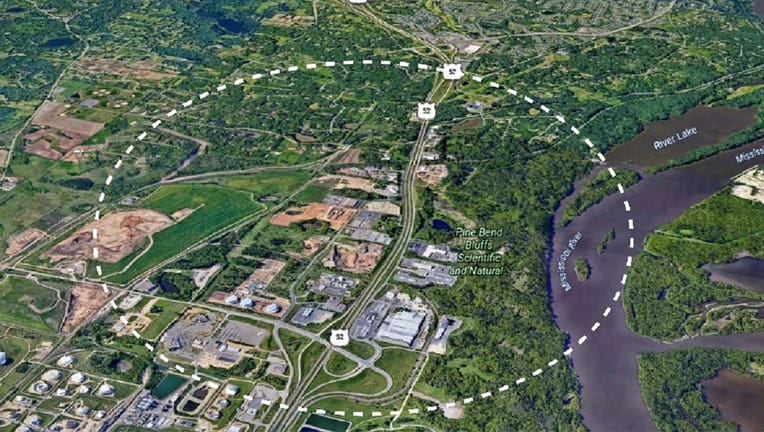 The crater lies on the south end of Inver Grove Heights, near the Mississippi River. (University of Minnesota / Supplied)

INVER GROVE HEIGHTS, Minn. (FOX 9) - University of Minnesota geologists discovered the site of a meteor strike in Inver Grove Heights that dates back hundreds of millions of years.

In a release published last month, the university says the crater appears to be about 350 feet beneath the city and about 2.5 miles wide. The impact area lies on the southern border of the city, near the Mississippi River, and includes the Pine Bend Bluffs Scientific and Natural Area on the river's edge. For reference, researchers say they believe this crater would be 11 times the size of the famous Meteor Crater in Arizona.

Researchers say it appears the massive meteor struck the earth around 490 million years ago, putting it near the end of the Cambrian period.

Crater co-discoverer Julia Steenberg says this is an incredible discovery. There are only about 190 identified meteor impact sites across the earth.

"I’ve been mapping and studying the subsurface geology of Minnesota for the last 13 years … and have not come across something as exceptional as this before," crater co-discoverer Julia Steenberg states in the release.