For at least the next month 25 members of the U.S. Army will help assist medical staff at Abbott Northwestern as they deal with their own staffing shortages.

(FOX 9) - For at least the next month 25 members of the U.S. Army will help assist medical staff at Abbott Northwestern as they deal with their own staffing shortages.

The soldiers deployed to Abbott Northwestern all have medical backgrounds and include nurses, respiratory therapists, physicians and pharmacists. All of them have worked in military medical facilities but for many, this will be their first time working in a civilian hospital.

The soldiers arrived in Minneapolis on Friday, started training over the weekend and were working alongside Abbott Northwestern medical staff as soon as Sunday.

The military members will be fully integrated with other medical staff at the hospital. They won’t wear military fatigues and won’t have special assignments because of their backgrounds.

"Whoever thought two and a half years ago we would have an Army team here giving care with us with Abbot Northwestern, but the pandemic has brought a lot of new things to many of us," Carol Koeppel-Olsen, Chief Nursing Officer and VP of Patient Care Services, told FOX 9.

Koeppel-Olsen says having military members assisting in healthcare procedures is a first for Abbott Northwestern. The hospital had applied for the extra help from the Department of Defense last fall, but it wasn’t until recently that they got their application accepted and received the help. 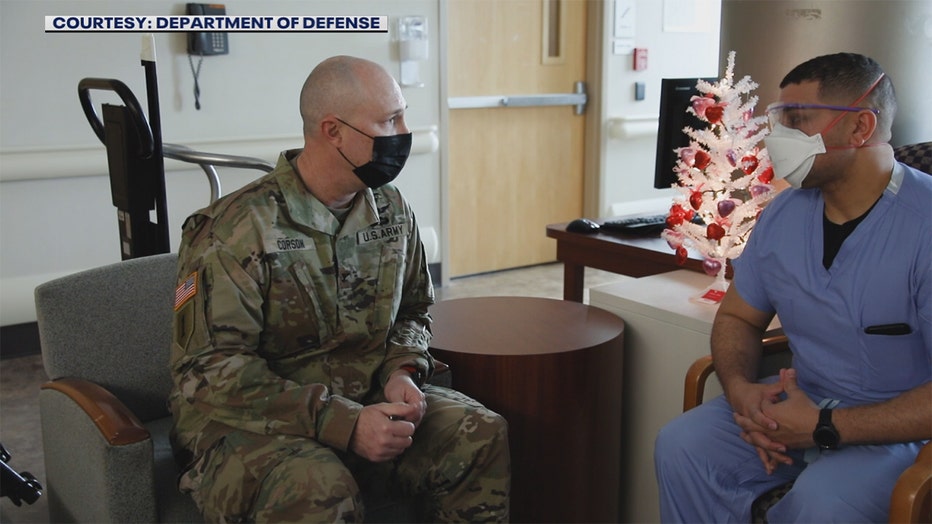 Soldiers arrived in Minneapolis to start training over the weekend and were working alongside Abbott Northwestern medical staff.

One of the reasons the military members are at Abbott Northwestern is because of staffing challenges. Over the last few weeks, with the omicron variant circulating widely in the community, hospitals, like many other industries, have struggled to keep staffing levels. Many medical professionals at Abbot Northwestern have had to miss out on work because they, or someone in their household that they care for, has tested positive for COVID-19.

Abbott Northwestern is currently taking care of 90 patients with COVID. Those patients are in departments varying from mental health, to mother-baby, to the ICU.

The Army team is scheduled to be at Abbott Northwestern until March 2. That’s when the Department of Defense and the hospital will determine if their mission should be extended.