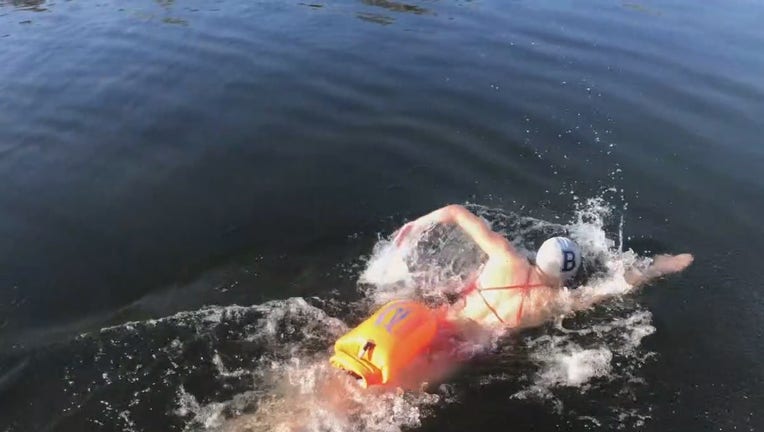 A group of swimmers from the Twin Cities is on a mission to swim across the English Channel later this summer. (FOX 9)

EXCELSIOR, Minn. (FOX 9) - A group of swimmers from the Twin Cities is on a mission to swim across the English Channel later this summer.

The idea came up two years ago and the open water training began. Six swimmers, five of them teens, are preparing for one of the most famous achievements in the world.

Minnesota swimmers prepare for relay across the English Channel

A group of swimmers from the Twin Cities is on a mission to swim across the English Channel later this summer.

"It’s crazy," said Abbe Colgan, a 17-year-old prepping for the relay. "I’ve kind of thought about that a little bit. It’s definitely a story we’re going to be able to tell the rest of our lives."

They call themselves the Shrieking Eels, inspired by their swim coach David Cameron.

"By no means is the Channel the toughest marathon swim out there, but it’s the one I’d say with the most history," said David Cameron.

Cameron of Minneapolis has twice swum the English Channel solo and several more times as part of a group relay.

"It’s most often compared to Everest," said Cameron. "There’s about two or two and a half times as many people who’ve summited Everest as who’ve done the English Channel as a solo swimmer."

The six originally planned their Channel relay swim, which is one hour at a time per swimmer, for last summer until the COVID-19 pandemic delayed it. Now, their swim is set for mid-July.

In the meantime, they’ve just kept training with as many open water swims as possible, starting as soon as the ice melted away.

"It will definitely be tough, but we’ve been preparing for this for a while," said Daniel Cameron, a 15-year-old on the relay. "Our qualifier might have actually been tougher than this."

The Channel swim is 21 miles through wind and chop and current and in water somewhere around 60 degrees. There are also strict rules.

"Like if we even just touch the boat, it’s completely over," said Daniel Cameron.

Then there’s other things they try not to discuss with their parents.

"My mom listened to a podcast by a woman who had swam it, swam a relay before, and after that she was like I’m going to try to pretend I’m not terrified, but it’s ok," said Colgan.

For more information about their trip and donation information, click here.