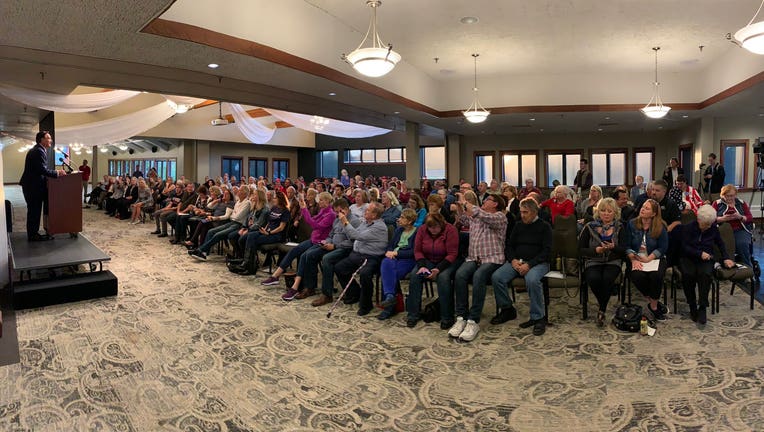 A meeting in Anoka, Minn. for GOP volunteers ahead of Donald Trump's campaign visit in Minneapolis Thursday.

ANOKA, Minn. (FOX 9) - Republican and Democratic leaders in Minnesota say President Trump’s planned campaign stop in Minneapolis is getting voters on both sides of the aisle excited for the 2020 election.

The President's Thursday night rally is exciting people on both sides of the aisle in Minnesota, which will be a battleground state in 2020.

A Donald Trump campaign volunteer education event was held at Greenhaven Golf Course in Anoka on Monday. Around 100 people attended the event. There, honorary chairman of the Minnesota Trump Campaign and My Pillow CEO, Mike Lindell, rallied supporters to get involved with the campaign.

Excitement is what Trump supporters say will carry them to a victory in 2020. The campaign is trying to do something that hasn’t been done in Minnesota since 1972: get Minnesota voters to choose a Republican presidential candidate.

President Trump has tweeted several times over the past few months saying he has his sights set on Minnesota. Those remarks are something that the Minnesota DFL Chairman Ken Martin says he’s not surprised to see after a tight race in 2016.

“We of course know we’re going to have to work harder than we ever have before, that Donald Trump and the Republicans are investing an unprecedented amount of energy and money in this state, but we’re prepared for that,” Martin said.

He said Trump’s planned campaign stop in Minneapolis is also energizing Democrats in Minnesota to get involved in the race early. He said they are carrying over excitement from big wins in statewide elections in 2018.

“I’m confident that that energy you’ll see on Thursday in Minneapolis will be as much for DFLers as it is for Donald Trump,” Martin said.