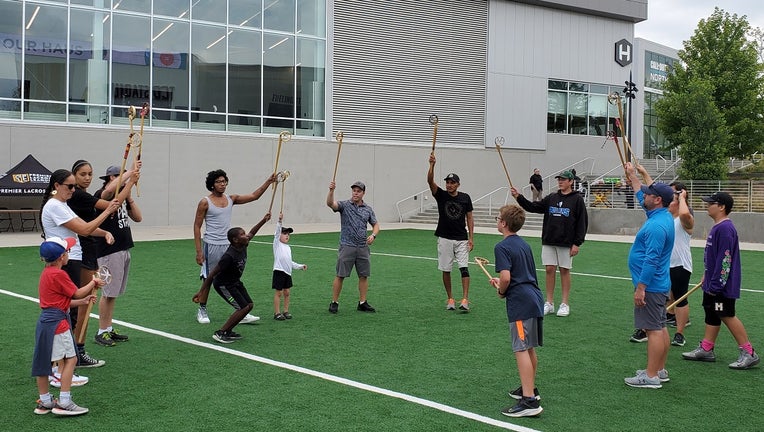 EAGAN, Minn. (FOX 9) - Premier Lacrosse League is taking over TCO Performance Center in Eagan, Minnesota this weekend, but ahead of the professional games the focus is on the origin of the sport.

Organizations Anishinabe Baagaadowewin and Twin Cities Native Lacrosse teamed up with PLL so that members of Midwest tribes will play traditional lacrosse with wooden sticks before the start of the first pro game each night.

Premier Lacrosse League is taking over TCO Performance Center in Eagan, Minnesota this weekend, but ahead of the professional games the focus is on the origin of the sport.

"It’s a lot more difficult than a modern stick for sure because of the size," said Isaiah Kicknosway, the president and founder of Anishinabe Baagaadowewin. "There’s not much space there to make an error or pick [the ball] up."

For the organizations, the goal is reconnecting the past with the present.

"I know in my area where I’m from it has been lost," said Kicknosway. "Different nations haven’t been able to play this continuously through history, so it’s really giving Indigenous people a connection to that past."

For hundreds of years, the Anishinabe people played lacrosse, known as the medicine game, for spiritual significance.

"This game has that healing quality that we get together and have fun that gives a chance to overcome some of those obstacles and really celebrate each other," said John Hunter, the founder and director of Twin Cities Native Lacrosse.

"This sport was created by the Indigenous people and we need to respect and understand that and honor that game that we are lucky and fortunate to play," said Mike Rabil, the co-founder and CEO of PLL.

Hunter says they continue to honor the past by passing it on to new generations.

Starting this week, PLL players will be wearing orange helmet straps in honor of the discoveries of unmarked graves at Native boarding schools in Canada. The league released a statement saying they stand with Indigenous communities.

For the schedule of this weekend's PLL games at TCO, click here.