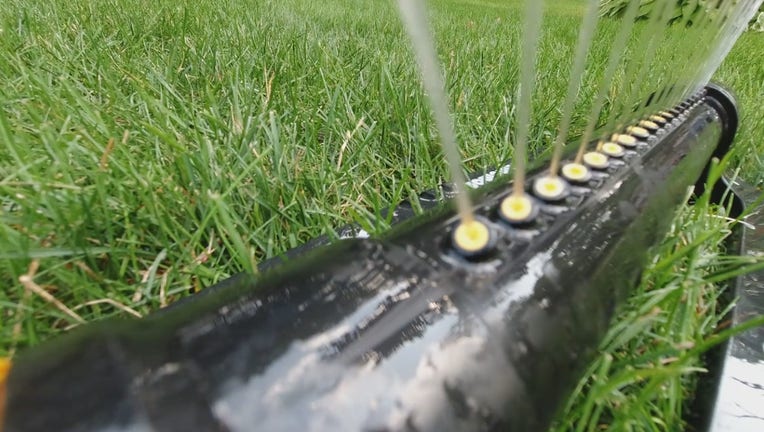 A sprinkler waters a lawn amid a drought in Minnesota. (FOX 9)

(FOX 9) - With the rain deficit facing Minnesota, it’s been a battle to keep lawns alive this year.

Adam St. Pierre, the owner of Diamond Cut Lawn Care, is out every day seeing how the heat and lack of rain are impacting people’s grass.

Tips to help your lawn make it through the drought

With the rain deficit facing Minnesota, it’s been a battle to keep lawns alive this year.

"Without the rain it’s been kind of a struggle to keep things going," said St. Pierre.

St. Pierre shared the following tips to help maintain your lawn amid the drought.

He says the best way to care for the grass that’s still green is to avoid overwatering.

"The ideal watering schedule is going to be water as deeply as you can for as infrequent as you can," he said.

That means water a spot for a longer period of time – like an hour or more – and as often as about once a week.

The deeper the roots, the better chance dormant grass has of bouncing back.

If your lawn’s roots can’t grow deep because of a hard soil bed you might need to water more. He says an easy way to check is to grab a screw driver to get a sense of the soil moisture under the grass. If the soil has good levels of moisture, the dirt will clump together nicely.

"If it totally crumbles in your hands then it’s not really going to come back," said St. Pierre.

He says be ready to recognize if some spots are a lost cause.

"Once you start to see the grass totally die off where it’s flattened like that then that’s probably not going to come back," he added.

Seed new grass in the fall

If it looks like your lawn has died, St. Pierre says don’t get ahead of yourself and try to seed now. New seeds need too much water and it’s hard to give them that in summer. Instead, wait until fall.

"You get good growth in the fall," St. Pierre said. "It goes into that dormancy in the winter, gets another growth period in the spring and then it gets in to the stressful summer where it has the potential to die off, but you’ve already been growing for two seasons."

Mow once a week

He says skipping mowings can mean drastic trims to your lawn that further stress out the grass. Instead, he says keep mowing about once a week.