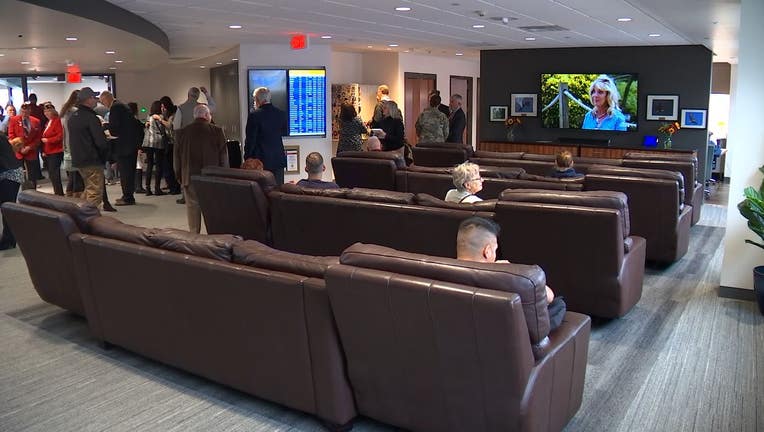 MINNEAPOLIS (FOX 9) - For nearly 50 years, one of the best kept secrets at MSP Airport has been a small room set aside for traveling service members.

Thursday, the special place for service members to escape got a big upgrade.

MSP Airport's Armed Services Center has been a place to rest for veterans for nearly 50 years, but now it has been renovated and reopened.

The new Armed Forces Service Center is a place for them to escape and relax. In it, they can take a nap or grab something to eat.

It was all started in 1970 by a mother named Maggie Purdam whose son died in Vietnam. He had once stayed at a similar service center in Seattle.

“Scotty asked our mom if she could make a place like that in our airport that would be safe and peaceful place for soldiers to come to,” said Nancy Purdum Hall, part of the founding family.

“This is amazing,” said Capt. Rebecca Cheman, of the U.S. Army. “This facility is unlike anything I’ve ever seen.”

It’s a facility set aside for Armed Forces members no matter what branch they serve.

What makes it so unique is that there are only eight like it across the country. There is also no military funding given to support it, as it is completely run through donations and volunteers.

Jeanne Morford is one of the original volunteers.

Morford and volunteers just like her staff the center 24 hours a day. It never closes and gives service members a new home away from home.

“Just having a place to go where you can be comfortable and you can relax and chill if your flight gets delayed...I mean, it’s just really amazing to have something like this here,” Cheman said.

A number of organizations stepped up to make the new facility possible, including Delta Airlines and the state legislature.