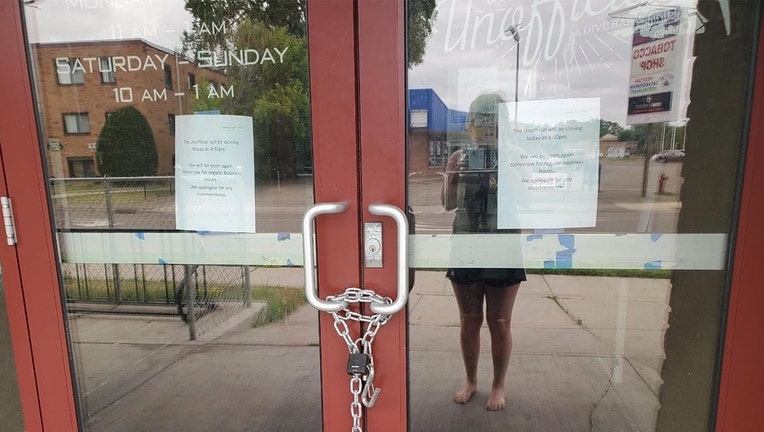 A popular bar abruptly announced its closing to employees who allege they were notified via email only after the doors were locked already. "He didn’t necessarily fire us as much as invite us to reapply for our jobs, and say it’s all our fault I gues

ST. ANTHONY, Minnesota (FOX 9) - A popular watering hole in St. Anthony abruptly announced its closing to employees who allege they were notified via email only after the doors were already locked.

An email circulated among employees from The Unofficial owner Chris Chistopherson informed them the doors would be closed, effective immediately, but he will, "Resume working towards restoring the original philosophy that made this place what it is."

Current staff would be allowed to be "part of that recovery," and he will be accepting applications starting Monday.

Former employees who contacted FOX 9 said they were shocked not only by the decision itself, but the way in which it was announced.

"I woke up to an email. He didn’t necessarily fire us as much as invite us to reapply for our jobs, and say it’s all our fault," said Robert Whelan, a former server with The Unofficial.

According to the email sent to and provided by employees, Christopherson created the concept in 2015, "With the philosophy that true hospitality can exist in a dive bar."

In 2020, he decided to add a general manager position, and take a step back from day-to-day oversight to focus more on growth, according to the email. 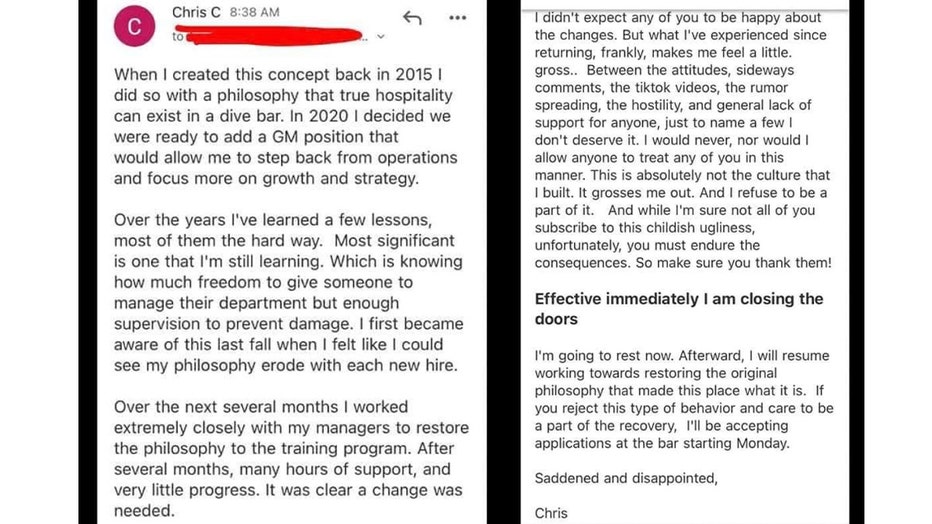 A copy of the email sent from Christopherson to former employees provided to FOX 9.

However, "Over the years I’ve learned a few lessons, most of them the hard way," the email said, among them being, "knowing how much freedom to give someone to manage their department but enough supervision to prevent damage," and feeling like he could "see my philosophy erode with each new hire."

The email alleges in the following months Christopherson was subjected to "attitudes, sideways comments, TikTok videos, rumor spreading, hostility, and a general lack of support from anyone, just to name a few I don't deserve."

But several employees contacted by FOX 9, who asked to remain anonymous in fear of retaliation, described the work culture under his oversight as "toxic."

"He [Christopherson] had been more and more confrontational and almost paranoid," said Whelan. "He would always go off on long-winded diatribes about ‘these servers and staff members that are against me and trying to sabotage me.’"

FOX 9 has reached out to Christopherson for comment, but he has not responded.