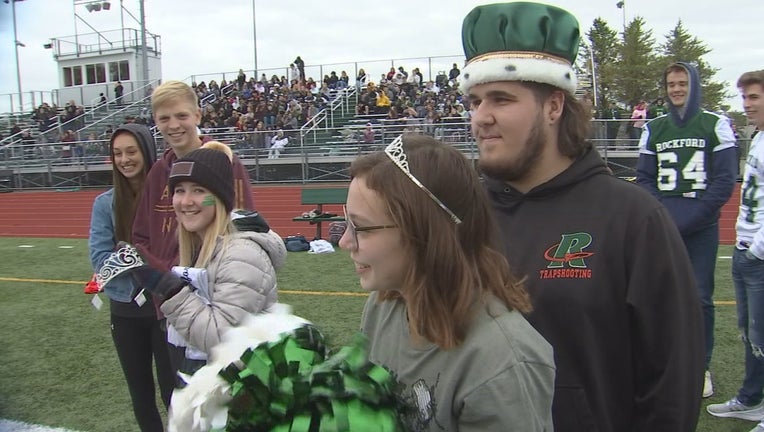 ROCKFORD, Minn. (FOX 9) - It is Homecoming Week at Rockford High School with Rocket pride blasting off for football, and of course the coronation of royalty. For this year’s Homecoming King, Jack Bryngelson, it has been a grueling journey.

“I’ve kept a positive attitude, and that’s what you need to get through something like this,” said Bryngelson.

A teen from Rockford, Minnesota is battling bone cancer. As a sign of support, the school named him this year's Homecoming King.

Over the summer, Bryngelson had a tumor in his lower back removed through a delicate surgery. It was growing around his spinal cord.

While doctors successfully removed the mass, devastating news soon followed. Test revealed the tumor was cancerous - an aggressive form known as chondrosarcoma, a bone cancer that develops in cartilage cells.

The long-term prognosis for most patients is bleak, though Bryngelson is tackling the fight ahead with a football mentality he developed on the gridiron.

“When I found out, it was go time,” said Bryngelson. “We’re getting ready to go into battle. There’s been a few nights where we shed a few tears because it’s a scary thing.”

His girlfriend, Karly Jensen, has been by his side throughout. Fittingly, she’s Homecoming Queen.

The entire school is rallying to support the couple in so many ways during the darkest of times. Yellow, the color of Jack’s cancer support network, has practically been added as an official Rockford school color this fall.

His classmates are lifting his spirits any chance they get. In addition to the homecoming honor, they wished him a Happy 18th Birthday from a volleyball match that he couldn’t attend because he was lying in a hospital bed following a second surgical procedure.

“It helps having these small, good memories add onto the crappy situation,” said Jensen. “It just helps keep us going with all the positivity around you.”

“You can’t just break down and go cry in the corner,” said Bryngelson. “I’ve kept a positive attitude and that’s what you need to get through something like this. I’ve been staying strong.”