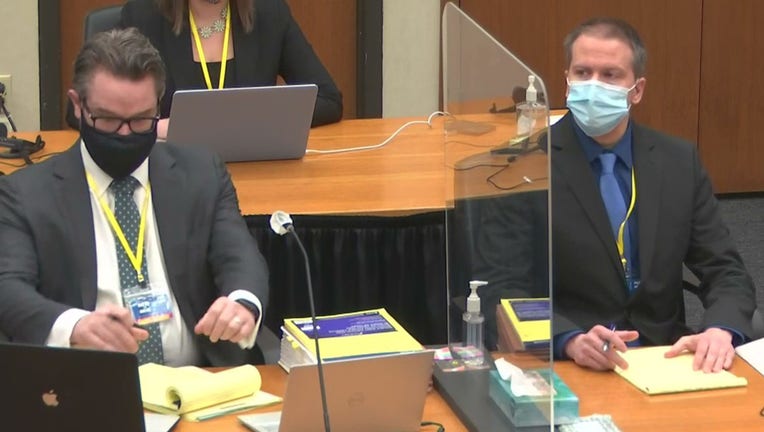 MINNEAPOLIS (FOX 9) - During week three of the Derek Chauvin trial, the state is expected to rest their case, handing things over to the defense to start calling witnesses.

What to expect in week three of the Derek Chauvin trial

As the trial of former Minneapolis Police Officer Derek Chauvin enters its third week of testimony Monday, here is what you might see over the next five days of court.

After the state is finished calling their witnesses, they will rest their case. At that time, it’s typical for the defense to file a motion for acquittal, claiming the state did not provide enough evidence to send the case to a jury. Legal experts say it’s unlikely a motion like this would be approved in this case.

"From what I saw I think he got all of the elements at least to get it to a jury whether or not they believe it is always an issue," Michel Bryant, an attorney with Bradshaw and Bryant, said.

He said during this process the defense could once again argue against the third-degree murder charge Chauvin is facing. If the judge decides to move forward with the case, the defense will start calling witnesses.

The defense is expected to call a use-of-force expert and a medical expert who will likely elaborate on arguments the defense is trying to make about the scene police were dealing with and call into question Floyd’s cause of death.

Bryant says one of the biggest unknowns in the case is whether or not Derek Chauvin will testify.

"He doesn’t have to testify. Under our constitution he’s not required, you’re not required, to testify against yourself so they can’t use that against him if he doesn’t testify but it will be interesting to see if he does testify and what’s done with his testimony," Bryant said.

Bryant says, depending on who testifies, the state could bring up information about two use of force complaints against Chauvin that the judge has allowed into evidence.

The jury is scheduled to be back in court on Monday at 9:15 a.m.