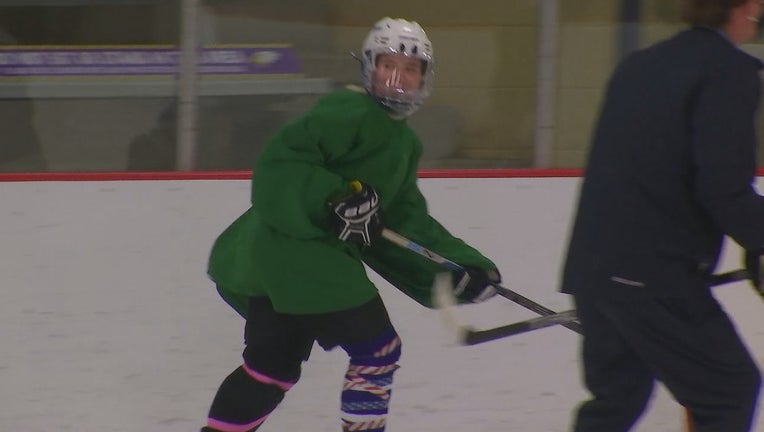 Red Wing varsity players got another chance to take the ice this week after their JV squad came through with a playoff win. (FOX 9)

RED WING, Minn. (FOX 9) - A junior varsity girl’s hockey team in Red Wing, Minnesota stepped into the playoff spotlight this week after the varsity players were forced to shut down due to COVID-19 exposures.

During playoff time in an already abnormal season, Red Wing’s girl’s varsity hockey team learned they had been exposed to COVID-19 during a game against Mayo High School, sending them into quarantine with games still left on their schedule.

COVID-19 protocols almost ended the season for the girl’s varsity hockey team in Red Wing, Minnesota, but the junior varsity team stepped up to play in their place and saved the day.

"Unfortunately, we can’t do it at that moment and my role in that is how to support the kids," said head coach Nicole Olson.

That support turned into a new plan: If they could win their game on Monday, they could stay in the tournament long enough for varsity players to finish their quarantine – giving them and most of the seniors one more game.

"I knew we’re not the team to lay down and give up we decided to stand up and take it fighting," junior Devyn Handwerk said.

The team asked their junior varsity counterparts to lace up and get in the game against Winona’s varsity team.

"I was like, ‘Oh my gosh, this is a full JV game. Ten of us against 20 mostly varsity players," freshman Grace Handwerk said.

As the JV team took the ice, they came out strong and started scoring goals.

"We were like, we can actually do this we can win," Handwerk said.

When the clock hit zero, Red Wing had won four to zero.

"I kind of started tearing up because I was so excited, I was like we actually won that for them," Handwerk said.

The underdog win meant many of the team’s seniors could come back on the ice, for at least one more time.

"It made me really happy and really thankful for them that they put it all out there," senior Brianna Beck said.

Giving the team a chance to end the season on their own terms.

"I know it will be something all of us will be able to share this memory forever," Olson said.

"It was so amazing to be able to tell them, you lost so much, but we’re not going to let it take any more, you’re still going to get that last game," freshman Allie Meyer said.

On Wednesday night, the Red Wing vasity team was able to play that last game. They lost to Albert Lea but had the chance to celebrate their final game of the season in a more traditional way.

"I got to play one last time I got to end on my terms," senior Emma Roe said.