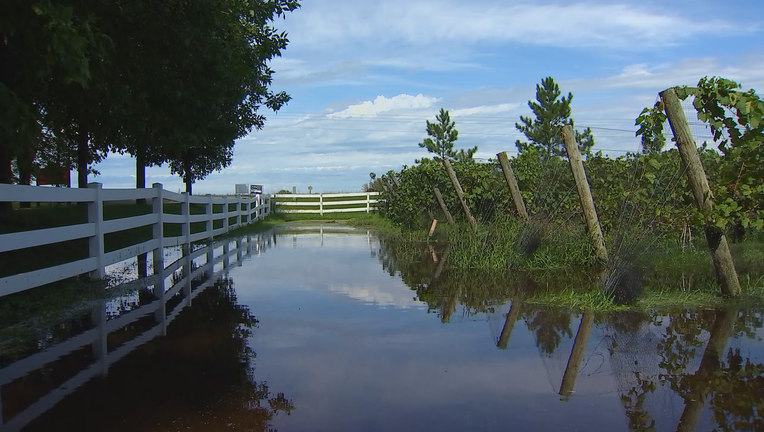 Flooding at New Chapter Winery near New Prague could impact the grapes.

(FOX 9) - Rainy weather in recent weeks is creating a challenge for farmers getting ready for their fall season in Minnesota.

The workers at Harvest Minnesota Orchard in Jordan, Minnesota said that the apple harvest is being impacted by the cold weather and rain. Some varieties of apples are running as much as two weeks late.

Rainy weather in recent weeks is creating a challenge for farmers getting ready for their fall season in Minnesota.

On Saturday, three generations of the Barten family were getting the family farm ready for fall. Picking pumpkins is a team effort, especially during the fall harvest, when rain has created for muddy conditions on the farm.

"It’s been a very, very wet few years that we’ve had, and this year specifically," said Joe Barten. "I think we got something like 4.5 to 5 inches just in the last week," he said.

Barten said it's been difficult to get the pumpkins out of the patch. There's also the threat of diseased pumpkins or stunted growth.

"Through June and July, we’ve had a really, really wet summer," he explained. "We definitely saw that. We had some plants that were stressed where the leaves are turning yellow. I’m guessing we’ll see a slight reduction in overall production."

Even though the mud means a late start to harvest this year, the Bartens are feeling pretty positive about their pumpkin production. The Bartens’ pumpkin farm opens next weekend, September 21.

At New Chapter Winery near New Prague, they're dealing with some flooding right now. There's as much as six inches in some parts of the vineyard and that could start impacting their wine this year.

"It will be a late harvest," said owner Jackie Brockway. "Probably two to three weeks late, which is only scary because then, if we get an early frost or the cold, we're kind of in trouble."

Another challenge: All of this water can dilute the grapes, impacting their sugar content and eventually their ability to ferment into good wine. The owners say they have plenty of wine aging in barrels, so there shouldn't be a shortage anytime soon.