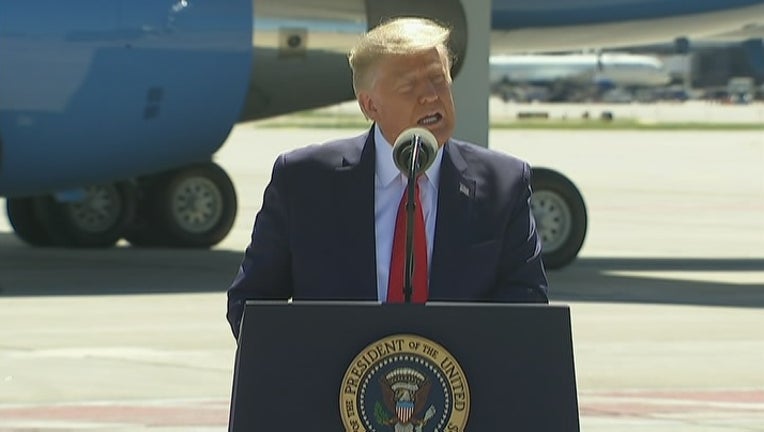 President Donald Trump spoke at MSP Airport Monday before heading to a campaign event in Mankato.

BLOOMINGTON, Minn. (FOX 9) - President Donald Trump blasted Minnesota officials Monday for their handling of rioting in Minneapolis, but did so without visiting south Minneapolis after Gov. Tim Walz told the White House it was a "really bad idea."

Instead, the president spoke at Minneapolis-St. Paul International Airport with Minneapolis business owners whose shops had been damaged or destroyed in the late May disorder following the death of George Floyd at the knee of a now-fired police officer. He then flew to Mankato for a previously scheduled campaign stop at the city's airport, in an effort to counter Democratic rival Joe Biden's show at this week's Democratic National Convention.

"Joe Biden is the puppet of left-wing extremists trying to erase our borders, eliminate our police," Trump told a few hundred supporters in Mankato. "we’re going to have an election that’s all about the survival of our nation."

Trump did not mention George Floyd's death or social justice. Instead, he painted a grim picture of the rioting in Minneapolis and said Democrats should not be put in charge of the country.

Trump wanted to visit south Minneapolis during his campaign trip, multiple sources in government and law enforcement said. Floyd's memorial is at 38th and Chicago, and the scenes of the ensuring riots are still evident nearby.

“I spent this weekend trying to tell the White House why it was a really bad idea to have President Trump go and stand at the George Floyd memorial and use it as a backdrop for his campaign and ignite the pain and the anguish that we are feeling in Minnesota,” Gov. Walz said on a Minnesota DFL delegation breakfast ahead of the Democratic National Convention.

Trump's chief of staff, Mark Meadows, told the Associated Press that Walz never reached out to the White House with concerns.

But it wasn't just Walz. A law enforcement source told FOX 9 they “begged” the Trump campaign not to visit the Floyd memorial in south Minneapolis nor the surrounding neighborhoods where the rioting and looting took place.

Minneapolis Police spokesman John Elder would not say whether the Trump campaign inquired about visiting south Minneapolis but said there was no begging of them not to, calling that comment ridiculous. He insisted the police department could handle security for the president if requested.

In the end, Trump never left the MSP airport tarmac to give his remarks about the unrest before departing on Air Force One for Mankato. There, he incorrectly said he -- not Walz -- called up the Minnesota National Guard.

FOX 9 has previously reported there was squabbling between Walz and Minneapolis Mayor Jacob Frey about the Guard's activation. (LINK: )

On the tarmac at MSP, the president told John Wolf, owner of Chicago-Lake Liquors in Minneapolis, "We’ll give you a hand. We’ll see what we can do.” The Trump administration denied Minnesota's request for FEMA disaster aid in July.

The president then flew to Oshkosh, Wisconsin for a similar campaign rally. He has another tarmac event scheduled for Yuma, Arizona on Tuesday.

Trump has trailed Biden in Minnesota and other swing state polling this summer, though the margins have not been consistent. In Minnesota, Biden has led by as many as 13 points and as few as 3 points in recent polls.