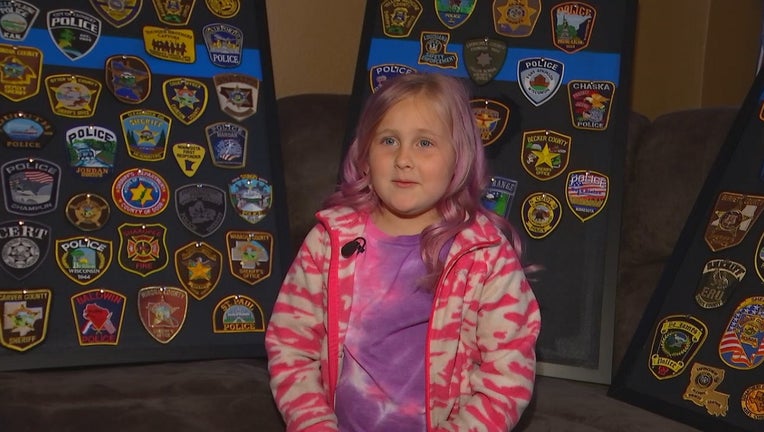 7-year-old Stella Peters has stumbled into a collection of police patches. (FOX 9)

BELLE PLAINE, Minn. (FOX 9) - A young Girl Scout in Belle Plaine, Minnesota had extra boxes of cookies this year, so she gave them away to local police and fire departments. And as it turns out, it was a gift that keeps giving back.

Little Stella Peters is the kind of kid whose heart is bigger than her backpack. It’s that same heart that earned her a special police escort to school on Friday. But the backstory is back at the house.

A young Girl Scout in Belle Plaine, Minnesota had extra boxes of cookies this year, so she gave them away to local police and fire departments. And as it turns out, it was a gift that keeps giving back.

That’s where police and fire agencies around the country have sent her a patchwork of appreciation. From Colorado, the Black Hills, even a Texas officer who ripped the patch from his uniform, they’re arriving in the mailbox each afternoon.

"Well, what we do after school is we get like ten to fifteen stuff in [the mail], one time we got thirteen, stuff," said Girl Scout Stella Peters.

Stuff is what you call envelopes of patches when you’re just seven. All of it coming from leftover boxes of Girl Scout cookies she and her father delivered to local police and fire departments.

"Savage was probably the sixth or seventh one we went to," said Stella's father Nick Peters. "And the chief wasn’t there to meet us. But he messaged us a couple of days later because he wanted our address and wanted to send Stella a card. And he included a couple of patches in the card."

"So Stella, it says 'the Federal Bureau of Investigation of Detroit, Motor City," explained Thomas, handing Stella a patch. "So again, my husband’s cousin worked for the FBI and sent me those patches. So I want to give them to you."

Which leads us back to that special ride to school. A short ride on a long journey to perhaps one day joining law environment herself. A day when she finally grows into the backpack of hers. But, in many respects, she already has.

Her father says when this all started a couple of weeks ago, they had no idea that collecting police and fire patches was a "thing." But word has spread fast and they’re expecting some patches soon from a number of retired officers in Europe. All from a few boxes of Girl Scout cookies.